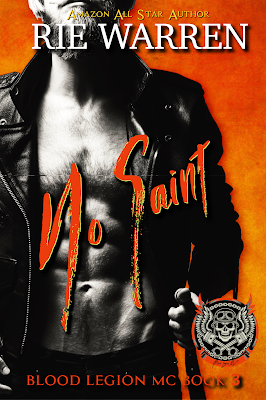 With a rap sheet about as long as the inked sleeves on my arms, I’ve been a misfit with a questionable track record. But I’ve fought for and found a home with the Blood Legion MC. Through thick and thin, brawls and bloodletting, I’ve created a rep: I’m the man.


I’m the man, and Honoré’s the only woman I want. This obsession with her is irrational and stupid considering she’s prickly, pissed off with me before I can even make a move, and definitely not my type. Except the beautiful New Orleans street busker takes my breath away—all untapped passion simmering just beneath the surface.

Something much darker simmers just beneath the surface of her life too.

Being someone’s old lady is the last thing on my mind. Been there, done that, along with the obligatory bourbon shots, random ink, and riding bitch on some guy’s bike. I can’t slip away from my life, or spare time for a surly biker who has crawled under my skin and rattled my last nerve in a sexy, delicious way.

Saint. As if. I’ve known my fair share of outlaw MC dudes, and not a single one of them was anything close to righteous. I want to hate him and everything he stands for, but he’s ridiculously hot. He’s annoyingly persistent. And he’s surprisingly kind.
There’s no way I can sacrifice all I’ve fought for to be with him. When Saint brings danger to my door, it’s only a matter of time before my secrets spill over to rip us apart. 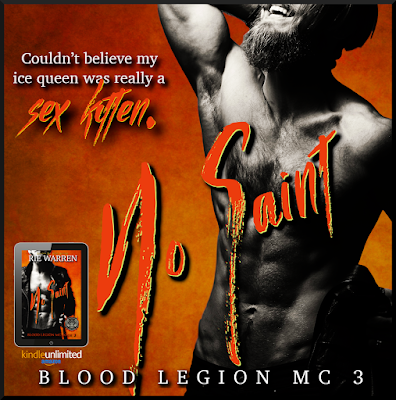 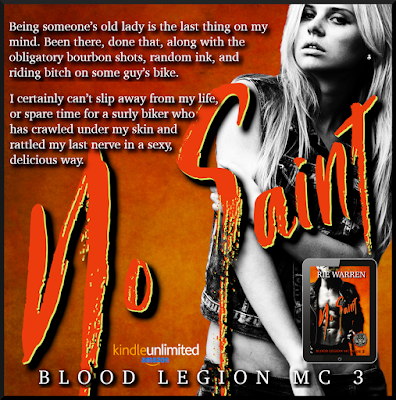 I just love this series. The author has given us another sexy, romantic mc story. I love the heartfelt way the author tells a story and this one is no different. OH don’t get me wrong, his is still an MC book so there is a lot of biker actions going on, but the romantic side to this book just touched my heart. Kudos to the author for a wonderful read.

The book’s title hits the nail on the head. Saint is a member of the Blood Legion MC and trust me he is no Saint. He used to be a member of another club and was basically set up to take the fall and ended up spending 5 years in jail. During his time, he heard about the Blood Legion MC and upon his release, he was accepted into the club. It’s here he sees a musician named Honore. He is instantly attracted to the beauty but she won’t give him the time of day. Little does he know she’s been around enough other bikers to know she wants no part of Saint, even if he is sexy and easy to be around. When she finally gives him a chance and things are hopefully working out for them, both their past collide. Will they be able to work through it or will everything explode around them.

I can’t recommend this book/series enough. It’s exciting, romantic, fun, and just a great read.
2 Thumbs Up and 5 Stars - grab this series/book up - you won’t be sorry you did.

What an exceptional read. This book will capture your attention as well as your heart. Saint is definitely No Saint, at least in the past, but he is really a good guy with a good heart. He is a tough guy though and proves as much when the lady that captured his attention and then his heart is threatened by her ex. Honore' is beautiful and talented and has given Saint no indication that she even likes him at first, but he soon softens her to him then captures her heart. He also captures her young son and his grandmother (her ex's mother).

This story is wonderfully written with plenty of excitement, humor and action both on the streets and between the sheets. The characters are charming, witty, foul mouthed and hot as sin. They guys are fierce and loyal and take care of those that they are close to and consider family and those that are family. Honore's son is as cute and charming as he can be and will steal your heart clean away.

This is a great read and a wonderful addition to the Blood Legion MC series and one that I highly recommend! 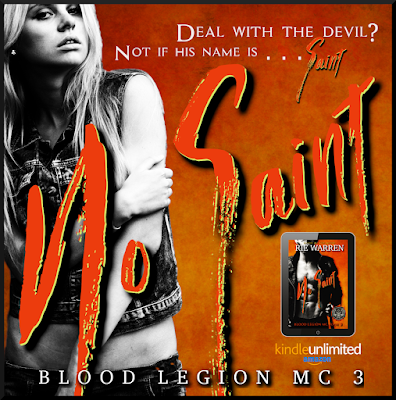 I raised to sitting, the top of my dress still barely covering both beaded nipples and little else. My hands roamed up Saint’s jean clad legs, and his muscles flexed beneath my fingers. When I reached the waist, I tugged him closer to me. The line of darker hair bisecting the planes of his stomach and the arrows of deep muscle from his pelvis were just teasing glimpses of what lay lower, beneath the faded denim. Peering up at him lids, I rubbed my cheek against the long hard length of his cock. “My turn.” Eyes slanted down, he groaned. “I didn’t bring you here to blow me.” My fingers at the tabs of his jeans, I opened the next one. “I want to.” Quickly plucking the rest of the buttons free, I pulled the fabric wider. All I could see was the nest of hair framing the wide base of his cock that throbbed with veins. “Off. Take these off!” I tugged hastily, my mouth already watering. With one of his wicked grins, he finally complied. Not one ounce shy, he kicked off his last article of clothing and stood there in front of me, all bold muscular masculinity . . . no apologies, and no apologies needed. I felt limp with wanting him, especially when my gaze roved from the strapping sinews of his legs to his . . . to his cock. He was fit. Hung. Huge. Inked. And that long thick dick was . . . pierced. Ohhhh. Another trickle of juice drizzled from my slit as I imagined Saint—big, pierced Saint—driving up inside of me. Precum slickened his completely erect, completely huge cock, and the Prince Albert piercing gleamed too. I perched closer, dress still hiked around my naked waist. “You’re pierced.” His head notched down, he nodded once. “You’re big.” “Touch me,” he ordered in a rugged voice. My hand on him, I tried to encircle the hot male flesh. His cock stood rigidly upright against his abs, and I anchored the heavy rod down slowly. Another drop of precum drizzled from the bloated crown to my fingers. Saint grunted, rocking closer to my face. Every muscle in his body tensed, and I ran my tongue over his clear jism, taking his essence into my mouth. Then I set my lips against the underside, rubbing my lips all over the turgid veiny flesh. I loved the taste. I loved the heady musky smell. “I’m gonna suck you now, Saint. And if you say no again, I’m going to tie you up.” 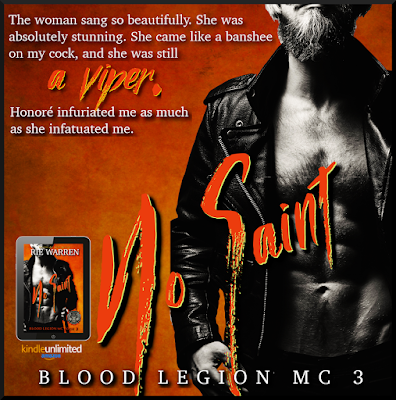 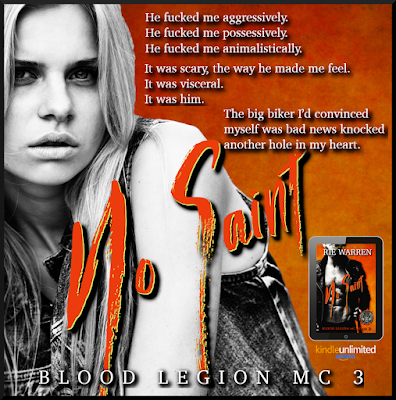 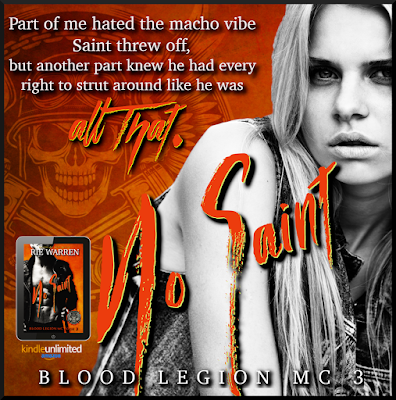 Badass, sassafras Rie Warren is an OG Amazon All Star author of Bad Boy books and MC romance. She delivers five star sex, suspense, and the best banter around. Her stories are one hundred percent original, do not contain fluffy plots or virgin brides, and wring every last emotion from readers to leave them with a satisfied smile. Rie’s tough alpha males are never brought to heel, but are instead healed by the feisty femme fatale of their perfect match. She grew up in Maine, went to college in Iowa (Iowa, what?), lived in Scotland, and married in Englishman. In true roundabout fashion, they came back to the States, settled in South Carolina’s lowcountry, putting down southern roots and pursuing their arty endeavors. Tale spinner and character diviner, Rie is a lover of sleep, wine, and rude memes often involving either Disney characters or Winnie the Pooh. She is raising two teen daughters along with an entire brain full of unruly characters.

Keep a fan handy, you’ll need it.
Follow the signup link below to her romance newsletter for sneak peeks, new releases, first looks, and her quirky sense of humor.

https://www.subscribepage.com/riewarrenromance
And, as always, happy sexy reading to you!