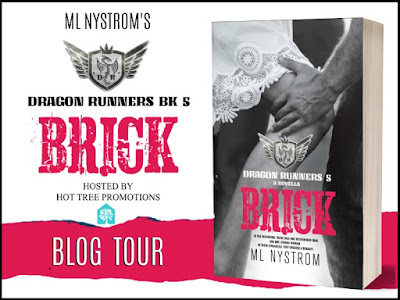 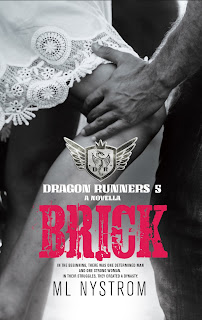 In the beginning, there was one determined man and one strong woman. In their struggles, they created a dynasty.

Brick had one mission since he was a boy: become a Dragon Runner.  The motorcycle club meant everything to him. Blood and bone from his brothers paid the Dragon’s dues time and time again. And watching it split apart was more than he could handle.

Then he met Betsey.

An unwanted daughter born into abuse, Betsy lived her life beatdown under a rigid thumb, never allowed to be herself.  Her one goal was to leave her abusive family and be free.  She fought on the losing end of that fight.

Then she met Brick. 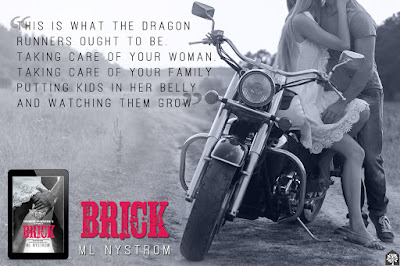 I am so glad the author decided to write Brick’s story. And what a story it is. It was amazingly good to go back and see how the present day Dragon Runner MC became the decidate, close knit family that they are today. Brick and Bestey’s story is one for the ages. The way the met in school to all they both had to overcome during their young lives to the strong fearless family originated couple they became. This is an outstanding face paced novella that will having you gritting your teeth yet melt your heart. Kudos Ms. Nystrom for giving us this Magnificent Look into how it all got started.

2 Thumbs Up and 5 Stars for a book / series that I Highly Recommend. If you are an MC reader you will love the Dragon Runners MC series, it’s a Must Read series in this readers very humble opinion.

What a wonderful story this was. Beginning with memories, the storyline brings you through the life of the Dragon Runners MC through the memory of the former President. He was the son of the founding President and as a child knew he was going to be a Dragon Runner when he grew up. In middle school he met her. The one that he knew he would one day marry. Betsey. She was something else. To everyone else she was the curvy, plain preacher's daughter who wore second hand clothes. To Brick, she was going to be his.

There was trouble in the MC back in the day and Brick remembers the trouble, the chaos and the pain and blood that brought him into the presidency. His memories give us the history of this club and the way he and Betsey's lives were affected, not only by the MC but by the events that led up to them being together after they graduated high school.

I loved this book and could not put it down until I finished it. It was amazingly well written and the characters were so very well written. I cannot recommend this book highly enough and hope that everyone will give this book and this series a chance. You will not be disappointed.

I've had stories in my head since I was a child.  All sorts of stories of fantasy, romance, mystery and anything else that captured my interest.  I'm a voracious reader, and have spent many hours in my life devouring books, therefore it's only fitting I should write a few myself!

I've spent most of my life as a performing musician and band instrument repair technician, but that doesn't mean I'm pigeon-holed into one mold.  I've been a university professor, belly dancer, craftsperson, soap maker, singer, rock band artist, jewelry maker, lifeguard, swim coach, and whatever else I feel like exploring.  As one of my students said to me once, "Life's too short to ignore the opportunities."   I have no intention of ever stopping so welcome to my story world.  I hope you enjoy it!