Family isn't always by blood. Family is who you are willing to bleed for.

Refusing to yield to his father's will and expectations to one day take the reins of the family business, Sam McGregor leaves his home in Texas.

Fate leads him to the small town of Polson Montana, home to the Kings of Retribution MC, where he starts over and meets Sofia Torres.

Sofia's fate was sealed the moment her father committed a crime against an outlaw MC. Strength and determination drove her will to survive the torment she endured at the ruthless hands of the Los Demonios.

Now, with her past behind her, Sophia has been building a life in Polson with her new family.

She never expected to feel anything for a man—until Sam. He evokes feelings she finds herself wanting to explore.

Sofia's strength is tested once more when her life is threatened.
Standing with his chosen family, Sam vows to get her back; proving he will stop at nothing to bring her home. 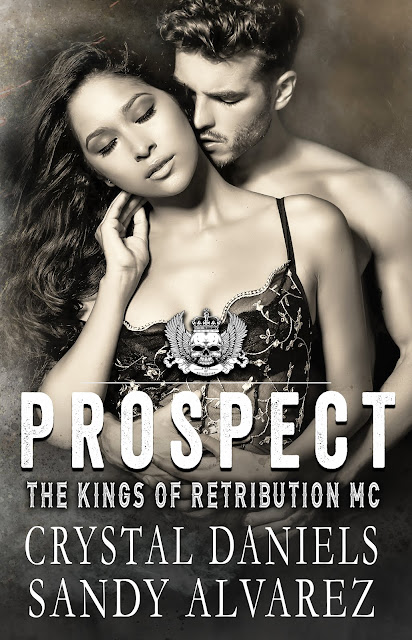 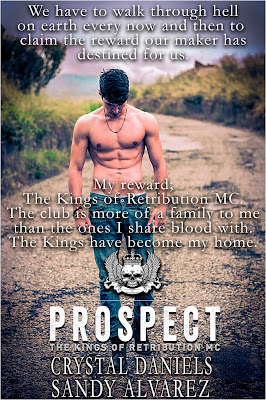 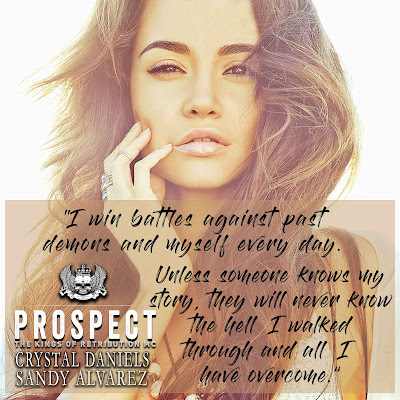 Every MC has to have a prospect or two, right? Which is a good thing for this reader because I love to see just what it takes to be become an MC Brother. May I say, that Crystal Daniels and Sandy Alvarez did not disappoint my reading expectations. This storyline takes us before Sam McGregor has even made to prospect status. Kudo to the authors for an excellent addition to the series.

Sam is running from his father’s domination. He wants to be his own man doing what he wants instead of what’s he’s told to do. When Sam stops at the small town of Polson Montana, he meets the Prez of the Kings of Retribution who takes him in and gives him a place to stay. That is where he meets Sophia. Sophia has also been taken in by the MC and given refuge. She is shy and doesn’t trust men at all. But the chemistry between Sam and Sophia is there from the very start.

I don’t do spoilers so I will simply say: Buy the Book. The patience and tenderness Sam has with Sophia will warm your heart. But don’t let that fool you. Sam has a fire in him that the MC has lit. A burning to belong and protect what’s his.

If you like MC romances, you’ll love Prospect. While you don’t have to read the series first, I highly recommend it, as the Kings Of Retributions books are all sinsational in my humble opinion, plus the characters do overlap from book to book. 2 Thumbs Up and 5 Stars for a great read: One you need to grab up asap.

Excellent read that will have you hugging the curves as this ride takes you through the twists and turns of Sam and Sofia's story. Coming from money doesn't always mean that things are good in your life, and Sam knows this all too well, with a father who tries to control his future, Sam bucks and rebels, entering the college he chose using the scholarship that he won without his father's knowledge. But when his mother dies, his life begins to spiral out of control until waking one morning not remembering what he had taken part in makes him open his eyes and get himself back on track. It takes time, but eventually he begins to prospect for the Kings of Retribution MC after he has proven himself to the men who have become his family, the ones that he hopes one day will become his brothers. Then there is Sofia, the girl who has been through so much and endured much more than Sam knows, but he recognizes that she is broken and he takes his time with her, knowing that she is to be his, but he also needs to be patient, take his time and earn her trust in him. Theirs is a story that will captivate you and make you fall in love with them.

The characters are very well written and quite developed and complex. Sam is handsome, sweet, a real southern gentleman amongst the MC, but he is also hard and willing to do whatever it takes to not only make sure that Sofia is safe, but also have the backs of the men he calls family. Sofia is a real beauty, broken but beginning to heal herself through her work with women like herself and with her ongoing therapy. Then there is the MC that has taken her in and made her one of their family. She has their protection, and with that the respect of all of the brothers as well as the friendship of the women with the club. She still has her demons that raise their ugly head every now and then, but she has become stronger and it is that strength that she will have to call upon when the men who are after one of the women in her care is taken, along with herself.

Exciting, intriguing, action packed and hot as all get out, this book will leave you breathless! I highly recommend this book, this series!

A little about Us!

We are sisters Sandy Alvarez and Crystal Daniels - Since 2017 we have co-authored and published six books in The Kings of Retribution MC Series - Undaunted, The Darkest of Light, Finding Solace, Defy ,Unbreakable and Lost King. Other books written by us include Leather and Mistletoe and Love above Law. When we are not writing you will find us spending time with our families or curled up with a good book.