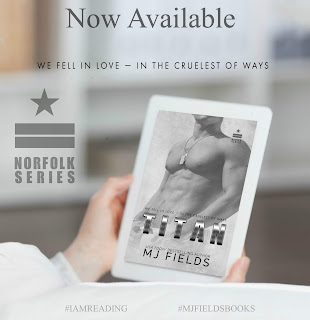 We're celebrating the release of TITAN by MJ Fields! One-click this beauty today! 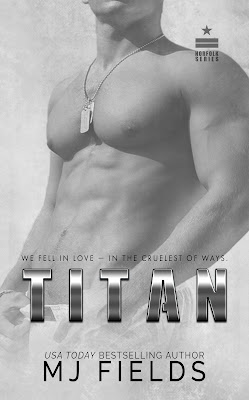 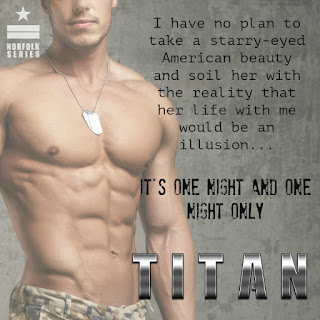 Not all officers are gentleman — some are villains.

Not all protectors care for your heart — some shatter it.

He was all of that and more.

One look at him and something inside of me woke from a three-year slumber.

One realization and I knew I would never be able to unleash that desire.

My world started to crumble. Fear crept in and I knew I needed Titan more than I could ever admit, or I could lose everything I have worked so hard for.

We fell in love — in the cruelest of ways.

*Titan can be read as a stand alone, but if you love a series, start with Irons, then read Shadows. 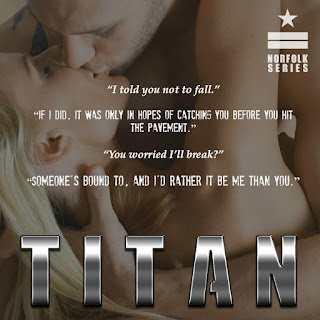 Dedication, Loyalty, Patriotic, Brotherhood are all things Titan believes in. Titan belongs to an elite group that live to serve and protect the country. Titan is married to the corp and loves his way of life. There is no room for relationship but lots of room for one night stands. In fact it’s tradition for Titan and the team to hook up the night before a mission. But then the one woman he has secretly longed to be with walks into his life. Laurie was and still should be forbidden to him. However saying no to Laurie is not an option. When she states she has no time for relationships between her career as a doctor and her daughter, Titan knows it’s the perfect setup for both of them it’s. If only it was that easy. No matter how hard they try to suppress them, feeling always have a way of worming their way in. Especially when you throw in doc’s precocious little girl who is totally impossible to resist. But they are determined to resist them and have a relationship behind the bedroom door only.

When a mission in a war zone goes sideways and Shadow’s plane goes down (Titan’s buddy), Titan refuses to leave them behind. He goes down after them in an attempt to save Shadow and his crew. Tragedy happens in many forms that night not only to the men but to one injured little girl that pins her hopes for help on Titan. Tragedies that bring Doc to the German Hospital they’ve been taken to help. But can Doc convince Titan that he has people that love and need him to do whatever it takes and come home or will he give up the fight. A fight that will be the hardest challenge he’s faced to date.

This is an amazing book kept me on the edge of my seat and glued to the pages. The storyline is full of suspense, intrigue, romance, laughs and OMG moments. My only regret is that I haven’t read books 1 & 2 of this series. But trust me when I say I one-clicked them as soon as I finished the epilogue. This is a Must Read that I highly recommend and if you start with Titan like I did, I bet you’ll be grabbing up the first 2 asap as well. Kudos to the author for a very well written book that totally melted my heart took my breath away. A phenomenal 5 star read.

How do you get through to an alpha fly boy who may be grounded for life? You put the woman he's always wanted but never dared to have. You put that woman in his arms, you make her a doctor, single mother to the child if one of his lost best friends, and you make her a dominant...just like him. She's perfect for him and Titan knows that this thing between the two of them cannot go further than the bedroom. She accepts those terms and agrees that it can't go further. But you know what they say about the best laid plans, right??? Yeah, they can tell themselves that all they want but when the situation turns from bedroom to hospital room, to living room with a dash of a cute as hell little girl who steals everyones heart, Titan and Laurie do not stand a chance in hell of that deal they made sticking.

Now, throw in some mystery, intrigue, heart-pounding action, and a favor that only her trust for him will allow to succeed..oh and let's not forget another little girl from foreign soil to put a mysterious spin on things and along with the hotness between the sheets, you have an exceptional story and characters that will have your spine tingling, your nails to be bitten and your heart rate to accelerate. Titan packs all of this within the pages between the cover of this extremely well written story.

I was fortunate to read this story, but also unfortunate to read it before reading the first two books...something that I will remedy shortly and I can hardly wait to read what led them all to where they are now. An exceptional story with equally exceptional characters, I highly recommend this book! 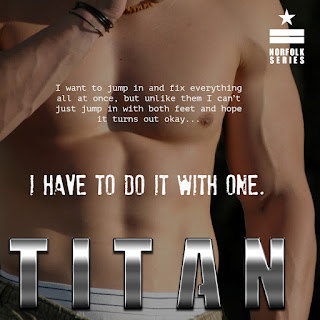 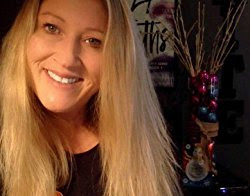 
USA Today bestselling author MJ Fields write books that scorch pages and melt hearts.
Her style is raw, gritty and authentic.
Love an alpha and a strong heroine? She does too.