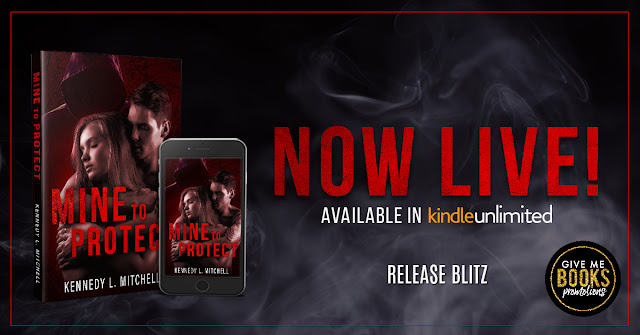 "Outstanding!! Mystery, intrigue, action and an edge of your seat nail biter."
"Holy Moly Mine to Protect was exciting, and suspenseful and oh so sexy."

A standalone, romantic thriller novel where obsession is the name of the game.

Recruited to the FBI Cas Mathews has one focus - catch the killer. That's until officer Alta Johnson shoves her way on to the team, making him fantasize about the delicious curves she hides beneath her park ranger uniform. Alta’s natural beauty catches his immediate attention, but the strength behind her fierce gaze is what holds him captive - demanding he learns more about her.

As the team grows close, the serial killer shifts focus putting them all in danger. Cas should walk away before their sizzling attraction distracts him and gets them both killed. But as the threat pushes Cas and Alta closer, the temptation turns too hot for either to resist.

With their focus diverted the threat zeroes in, catching everyone off guard. Figuring out the players in the killer's cat and mouse game is key to Alta’s survival. Cas swore he would protect her but with the clues carefully hidden, can he figure it out before Alta disappears for good?

Outstanding!! Mystery, intrigue, action and an edge of your seat nail biter. Who is taking these women? Who is stalking Alta? Twist and turns will bring you through the life of two broken people who have found their healing, with each other while trying to solve the crime of an apparent serial killer in the Tennessee State Park that Alta works. Her horrid past seems to be repeating itself, but no one can figure out why. Her kidnapper was killed, but yet the things that happened seem to be repeating themself. It is up to the two FBI representatives to figure out who is taking the women and who is stalking Alta. Never wanting or welcoming the touch of another person, Alta finds it funny that she is able to take the touch of the large man who is just as much a mystery to her as she is to him. But Cas's touch seems to calm her, to make her feel safe. He is intrigued by her as she seems to bring a bit of peace to his soul. Together, they let their attraction bring a healing to each other.

These characters were extremely well written and quite complex. Cas is fighting the memories of his military past. Alta is trying to regain a normal life, but her memories of her captivity have taken a lot from her, including her peace of mind. The supporting characters are equally well written and Peter's is a blast when he pushes Cas' buttons. They've known each other for years, having served together. Now they are back together working on this case in an effort to save more women, as well as Alta.

An addicting storyline and gripping characters that will capture your attention and your imagination. I highly recommend this read.

Kennedy lives in Dallas with her husband, son, and 80lb Goldendoodle who still believes he's a lap dog. A bookworm at heart Kennedy loves to snuggle up in bed or by the campfire with an unputdownable book. She began writing two years ago with Falling for the Chance and has no plans of stopping. Her novels are witty, action-packed, and offer enough steam for a great facial. If you like strong heroines and sexy, tattooed men who can't keep their hands off them then this author is the one for you.