Jake has had to watch from the sidelines as the girl of his dreams dated his best friend. He’s had to bite his tongue and ignore the angry shouts and emotionally abusive words his buddy and neighbor spewed to a woman who should have been treated like treasure. He couldn’t do anything; she wasn’t his.

Until Poppy shows up beaten and bruised asking for help to escape.
To put her at ease, he takes her somewhere no one will look - The Last Resort Motel.

They walk into room 19 as friends. Jake, Poppy’s protector, and Poppy, a shell of the woman she once was.

When they leave room 19, will they go their separate ways, or will the magic of The Last Resort heal and help them find what they both need? 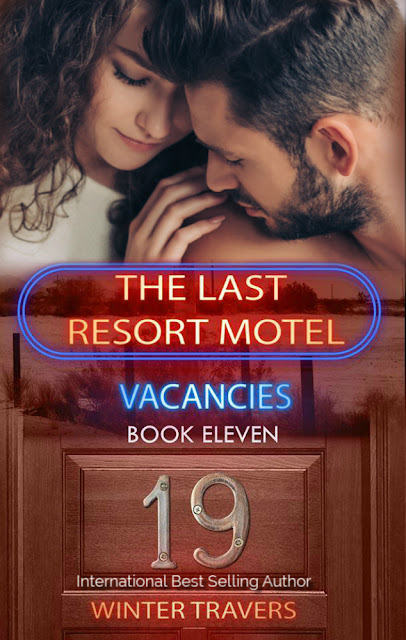 What a great way to end this year-long, one a month, series of stories that all revolve around the Last Resort Motel. From the 1st book to the last the stories have captured my heart with all the memorable events that brought people to the motel and their particular rooms. This is very true with room 19.

Jake has lived next to Poppy and listen to fight after fight between her and her boyfriend. While sensing that trouble is escalating, Jake is unable to convince Poppy to leave him. That is until one morning @2:30 a.m., when she knocks on his door, bloody and bruised, pleading for him to help her. Jake carries her to the “Last Resort Motel” due to it being secluded and off the beaten path. A place she’ll be safe and it will give her time to heal. What they don’t count on is the magic powers (as I like to refer to it) of the quaint little motel with it’s oddly numbered rooms.

Jake and Poppy’s story is tender and heartwarming. One that is not only a great addition to the series but one you don’t want to miss out on. I highly recommend all the Last Resort Motel Rooms/stories, including Room 19. I offer it 2 Thumbs Up and 5 wonderful stars.

Also Available in the Series

Winter Travers is a devoted wife, mother, and aunt turned author who was born and raised in Wisconsin. After a brief stint in South Carolina following her heart to chase the man who is now her hubby, they retreated back up North to the changing seasons, and the place they now call home.

Winter spends her days writing happily ever afters, and her nights zipping around on her forklift at work. She also has an addiction to anything MC related, her dog Thunder, and Mexican food! (Tamales!)

Winter loves to stay connected with her readers. Don’t hesitate to reach out and contact her.