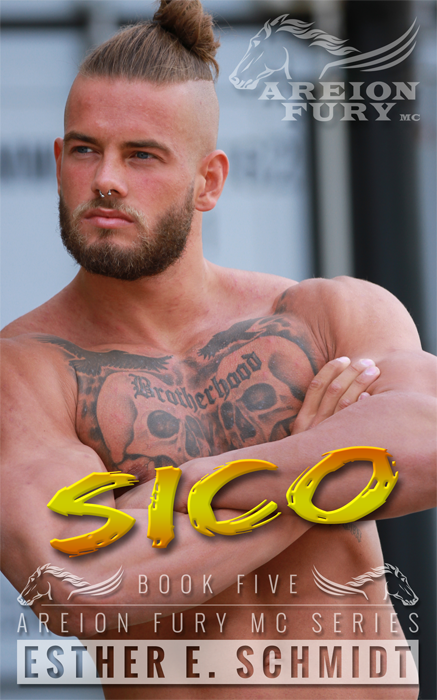 Sico is a callous man; no feelings, and no love for himself nor for others. That is until a certain woman spikes a surge of possessiveness inside him. Enough to claim her as his ol’lady on the spot without knowing her background. Realizing she’s not whom she appears to be, he finds himself feeling unworthy and works hard to become the very man she deserves.

Simi lives behind a mask. Events from her past have pressured her into labeling herself to prevent more damage in the future. For her it is easier to hide behind a lie; because people, no matter if they are close or not, will always judge.

When a club enemy strikes, retaliation draws blood and fighting is no longer an option but a necessity. The choice to do what’s right may lead to clearing a path for the future or create one where the fire of hell will take away everything that’s innocent and pure. Lives are lost, hearts will merge, but will there be a future left or will the need for blood and revenge drown everyone in its path? 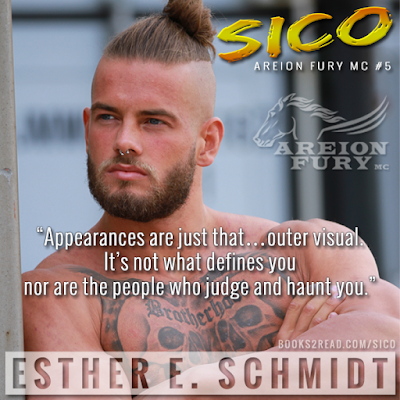 
WOW did I ever love this addition to the Areion Fury MC series. This is Sico and Everleigh’s story and Oh My what a story it turned out to be. Ever since the day Sico claimed her (even if it was sorta by accident) these two have been like oil and water. They kinda have this love/hate thing going on, well more like love the sex time but hate everything else. But when Sico takes the heat for the club’s latest retaliation, it throws Sico and Everleigh in each other’s hip pocket for days, and Ms. Schmidt has does a remarkable job of telling their story that you’ll feel your right there in those hip pockets with them. (Trust me you’re gonna love it there too). The story is fast paced, funny, hot as heck and exciting, in true Areion fashion. I don’t do spoilers but I will say this club is 100% about brotherhood. They take care of their own no matter what and this is oh so true in Sico.

2 Thumbs up for a Great addition to the series and 5 stars for a sexy, wonderful storyline that I highly recommend every MC lover read. And may I add, that I can not wait for book #6, Calix’s story. Something tells me Calix has met his match and holy cow it’s going to be a hot time for sure. Kudos to Ms. Schmidt for one phenomenal series that just keeps getting better and better. If you haven’t started the Areion Fury Series, there is no better time than now to join us on this amazing ride.


Before writing my review of this book, I checked out other reviews because...well, just because. There was one in particular, along with comments that made me decide to start my review off like this:
Not everything you see or hear about someone is always the way things really are. Not all people are really who they portray themselves to be. Such is the story of Everleigh and Sico. What you get with their story is a glimpse into what makes people the way they are, they way they want the world to see them, and for one of these, it out of self-preservation, out of a feeling that she has put upon herself because of a horrible act which is forced upon her by someone she trusted in her life, with her heart. After that, she felt that she was a slut, a whore. She even went about portraying herself as such, but Sico saw something in her. It drew him to her and he claimed her for himself before he even knew what he was doing. Their hate/hate relationship and the banter..ok arguing between the two of them is entertaining, to say the least. So is watching their relationship bloom, and Sico find that he does in fact have a heart and that heart does know how to love. After claiming her, he never went with any other women, she was the only one he wanted (even if he kept that to himself for a bit). But let me tell you....when these two get together...the heat is so intense that you can feel the heat through the pages. Oh..and for vengeance...what happens to the ex and his two buddies that made up that FORCED THREESOME...Man...that was epic! I loved these characters. I love Everleigh's strength. To go through what she did and to pull herself up and move forward was amazing. Although she did take what happened to her and put the blame towards herself at first, pinning herself as a whore, not being able to brush off the dust as Calix states, she is finally able to put all of that behind her. It's her fears that have her pushing hard at Sico and anything he wants. But he is persistent and a hardass a lot of the time. He, having never known love or how to give it, is struggling with these feelings that are attacking him. He doesn't know what they are and doesn't understand how to handle them, so he behaves as he always has. But he does take a bit of twisted satisfaction in that their relationship is him pushing and her getting angry and firing back. He admires her for that. She doesn't back down from him. All it takes is a few words from Calix to open both of their eyes, which in turn, opens their hearts. An absolute new favorite of mine now, I cannot recommend this book highly enough. Just remember...you can't always judge a book by it's cover! Don't judge these characters until you know their story!

Sico can be read as a complete standalone.
But if you'd like to know all the characters
for a greater reading experience: