Keith and Katrina are back! Reader favorites Keith Rossetti and Katrina Legato from Re/Paired (Doms of the FBI 2) return for another emotional, sexy, and dangerous adventure. 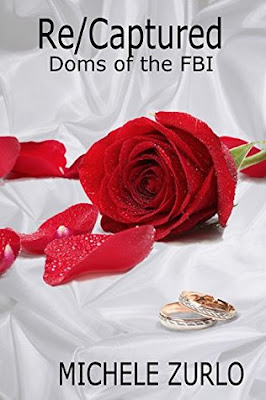 Understanding Keith’s message—he’d wanted to put her mind at ease with regard to the children so that she could focus on submitting to him—she lowered her gaze. “Can I have ten minutes to put my bag away and freshen up?” “Yes. I set out what I want you to wear.” His voice washed through her senses, overpowering her with peace and excitement.

Briefcase in hand, she turned to follow his instructions.

“Kitty Kat.” The unspoken order halted her. She turned back to him.

Closing the distance she lifted her face. He caressed her cheek with one hand and wrapped the other around her waist to support her lower back, two points of contact only. His lips brushed hers, teasing at a third point. He massaged, a gentle pressure welcoming her home and to her role as his submissive.

Slave to his mastery, she sighed into it, dropping her briefcase and lifting her arms to twine them around his neck, and she pressed her chest to his. He deepened the kiss, plunging his tongue deep to taste and stab. The hand on her cheek slid into her hair, and the one on her back lowered to squeeze her ass. She forgot about everything. The stresses of her day fell away as she melted in the face of his demand.

He broke away to trail sucking kisses down her neck, stopping when the collar of her dress shirt got in his way. 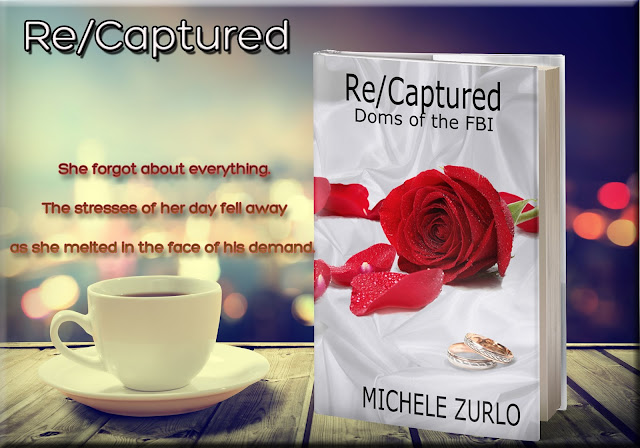 Another great addition to the DOMs of the FBI series. Re/Captured is Keith and Kat’s story (yes the same couple we met earlier in Re/Paired). The author has done a wonderful job of bringing this couple full circle. They have been through so much in their lives that it’s a wonderful treat to read about the continuation and how far this couple has come.

The storyline becomes full of suspense when a killer sets their sights on Kat’s Office. Events cause the couple to struggle to make all the right decisions for their small family as the wedding approaches and the killing continues. But when the killer makes things personal, the suspense and Keith and Kat’s determination to catch him ramp up. Keith Rossetti grew up the hard way--fleeing from his older sister's fists and finding addiction at a young age. It's a miracle he was able to make it into the FBI, and he fiercely guards his relationships with a handful of close friends.

When Katrina Legato's brother brought home his Marine buddy all those years ago, she fell head-over-heels in love. Ten years have elapsed, and she hasn't forgotten that toe-curling kiss he gave her for her eighteenth birthday. She knows he's a demanding Dom who doesn't respect his submissives or keep them for long, but if that's all she can have of him, then she'll take it.

When refusing Kat sends her to another Dom, Keith rethinks his decision. He plans to show her exactly why he's not a suitable life partner for anybody. But Kat, one of the only women he's allowed into his heart, isn't what he expected. She's no pushover. She demands more from him than anybody ever has, and he finds himself wanting to be the man she thinks he is. As she repairs his damaged soul, a stalker targets her. Is it just a coincidence that his mother pops back up in his life and his sister is suddenly calling his office?

"Wow. This book was so freaking hot!! [Re/Paired] has great balance....heavy on the romance with enough suspense to keep it interesting and that's how I like it."--Under the Covers Book Blog

If you haven't yet enjoyed Re/Paired, you can pick it up here:

D2D Links for Barnes and Noble and others: https://www.books2read.com/u/mVXLlb Find out more at www.michelezurloauthor.com