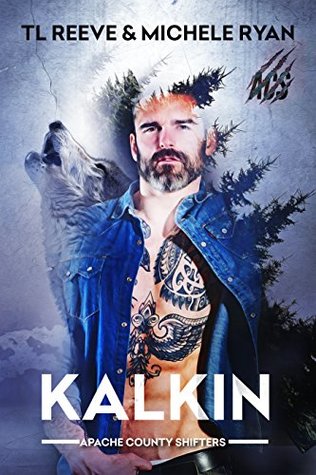 Keeley Blueriver is not doing a very good job hiding out. After being viciously attacked, she and her sister Danielle pack up and move across the country to Window Rock, Arizona. But Simon found them before, and he’ll do it again. How and when are the only questions.

Kalkin Raferty, Alpha of the Raferty pack, has spent his life protecting his family and pack from outside threats. He believes his time for finding a mate has passed. Who would want an old Alpha wolf?

A chance meeting puts Kalkin face to face with his destiny and now he can’t get the blonde-haired, hazel-eyed woman out of his mind. His wolf is poised to claim her, but with danger lurking around every corner, is he willing to risk everything to have her? 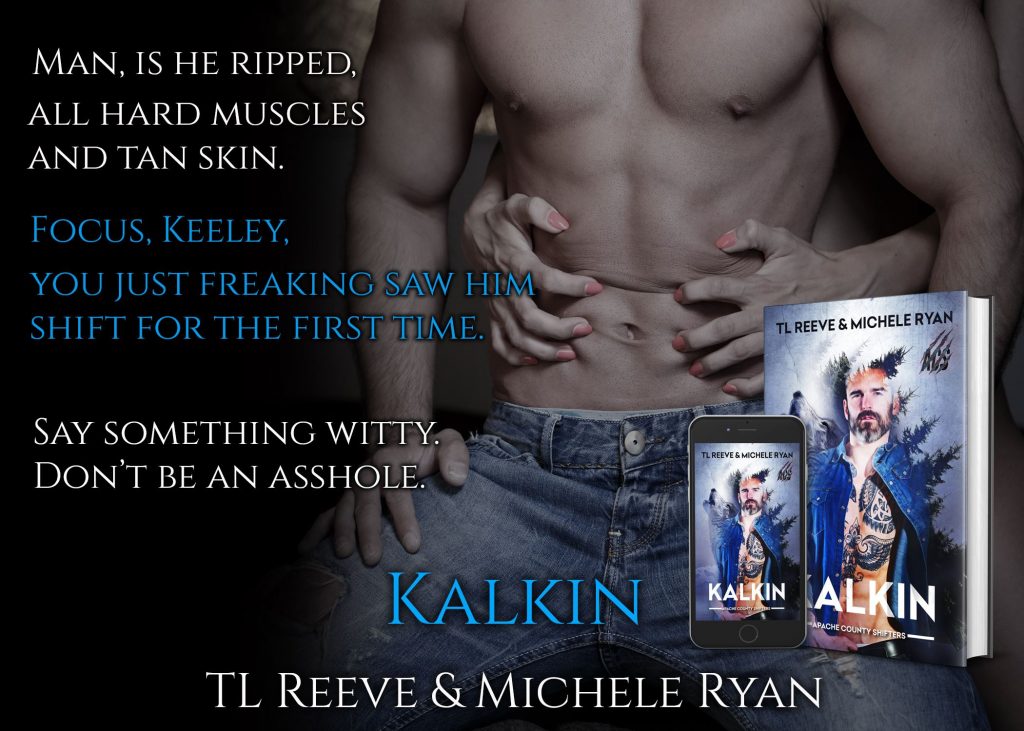 “Where the fuck is the baby?” He kept his voice controlled, knowing the pup was safe and sound with Danielle—for now. Kal tried in vain to keep his voice down so their neighbors couldn’t overhear their conversation. As it stood, he still wasn’t sure how he felt about Keeley. Well, he did, but acknowledging the mating and participating in it were two totally different things. Right now, they didn’t need any extra headaches. However, he had a sneaky suspicion he was in over his head and he was too stupid, or ignorant, to admit it. “He’s with Danielle.” Caden shrugged, moving around his brother. “The boy was in his pup form when I got him. I couldn’t take him to a hospital and you know if I took him to a vet—which there isn’t one in a twenty-mile radius—they would have freaked out if he spontaneously shifted. So, I brought him back here.” “You don’t think the girl will freak the fuck out when he spontaneously shifts, Caden?” Kal couldn’t believe what his brother said. “No,” he answered plainly. “No?” Kalkin snorted. “I have got to hear this explanation. Come on, lay it on me. Tell me, ‘oh smart one,’ why she won’t freak the fuck out when the baby shifts.” “She’s not normal either.” A slow small crossed his brother’s lips. “She got this…thing. I promised I wouldn’t tell anyone about it, but bro. She’s special.” “Great. Fan-fucking-tastic. So, she could have a serious case of gas, but she’s special.” Wow, he knew his brother could be stupid sometimes, but this was a colossal fuck up. It ranked right up there with the time they were sixteen and Caden decided he was going to pull the tail of a cat shifter. The asshole ended up in bed for a week with tiger claw slashes to his side. “I’m being serious, asshole,” Caden snapped, going nose to nose with his brother. “She helped the pup more in five minutes than a hospital could in two fucking weeks. I promised her I wouldn't say what it was, but I felt her. She did something to him and he was a different pup when he woke up.” Kalkin blinked, taking in everything his brother said. A part of him wanted to believe his brother and another part of him wanted to continue to chew his ass. He also realized he should be more concerned with the pup. Kal blew out a breath and scrubbed his hand across his brow. “How bad?” “Two broken legs and some bites. Danielle thinks he’ll be fine. She wrapped the wounds and set his back legs.” He chuckled a bit. “Aiden ate up the attention when I checked on them after Mrs. Martin hooked me up with some breast milk for the boy.” Caden turned serious for a moment. “I don’t know why Tiffany had fucking pups. She couldn’t even take care of herself when we were younger. Then she goes off and gets fucking pregnant. The bitch tried to kill him!” Kalkin watched his brother pace. “Aiden is now parentless. Why? Because she doesn’t have enough fucking sense to bring all the pups to her Alpha.” Wait. “There are more?” He couldn’t believe Caden would take one and leave the others. “Why did you leave them?” “Aiden is the only one who survived.” “Fuck.” He’d have to deal with this sooner rather than later. “Do we know the father?” Caden snorted. “If I had to guess? Someone in the Quincy pack. The kid smelled of piss and shit, though, so I couldn’t be sure.” “Shit. Not what we need right now, but because you went off half-cocked, you brought shit down on our new neighbors.” Kalkin couldn’t even be angry anymore. He understood Caden’s need to protect the baby. However, it couldn’t be at the expense of two women who’d been through their own shit. “What are you going to do when Aiden shifts and is a baby?” “Well, I had been thinking about it when you pulled up to house like Billy Bad Ass. I’m going to tell her what we are.” What? “Are you fucking kidding me?” He couldn’t believe what his brother was saying. “Why?” “Tell me you aren't planning to do the same.” Caden's blue eyes swirled with intent. “Tell me you weren't going to have Keeley run with you during the full moon.” His brother had him. He had been contemplating revealing himself during the first day of the summer festival. “Shit,” he said, blowing out a frustrated breath. “This is all FUBAR.” Fucked up beyond all recognition. “Tell me about it.” “You’re part of the reason, asshole.” He turned away from his brother and caught his neighbor staring at him. “Great.” “What?” His brother stepped over to where he was standing. “Ah, shit.” There, peeking out of their window, stood Keeley, Danielle, and a very happy little boy. Shit, maybe his brother had been right. “Yeah, great fucking work, asshole. I’m betting they saw and heard everything. So much for having to explain it to them.” “Hold on. You’re assuming they heard anything. They’re completely human. They couldn’t hear a flea fart.” “I thought you said Danielle is special.” Kal cocked a brow. “Or were you blowing smoke up my ass about her?” “She is. I can assure you what I experienced when she started working with Aiden,” Caden paused. “Shit, bro. It was amazing.” “Are you sure she was touching the pup?” he quipped. “Yes, dickhead. It wasn’t sexual at all, but it had been amazing nonetheless.” Caden’s blue gaze locked with Kal’s and his demeanor turned serious. “She’s my mate.” Of all the fucking things he expected his brother to say, finding his mate hadn’t been one of them. “Shit. Are you sure?” “Oh yeah.”


I really enjoyed this book. The storyline was really interesting and intriguing. I loved the cross stories coming through which I am sure is the set-up for the upcoming books in the series. I enjoyed the sisters and the differences in their abilities and the closeness they had. Same with the shifter brothers.

I loved the characters and found them to be engaging and quite developed and some of them quite complex. As for the lead characters, I'll start with Kalkin and Keeley, since I think that even though they may not be the leads, they are so closely in second place that Caden and Danielle should be placed in this section with the leads. As for Kalkin, he is a big time alpha male, but then he is also Alpha of his wolf pack, sheriff of the county he lives in, twin to Caden and sinfully hot! Keeley is beautiful, smart, younger sister to Danielle and has powers. She is more powerful that anyone knows and that is the way that she likes it. She is the mate to Kalkin, only she doesn't know it and because of the past that she and her sister have had, including most recently, she does not trust anyone other than her sister. But she does feel the strong pull toward Kalkin, is confused about it and does everything in her power to push him away. HA..not that Kalkin will allow that. But the sisters have secrets and until he knows what is going on, he will not be able to protect them and it takes a while before the sisters finally give the answers that he needs, only their past has come to threaten their lives again and spills lies that will throw a barrier between Caden and Danielle. Trust is not easy for either of those two.

Now, what I had a problem with....Keeley. Not right off, no I loved her until about halfway through the book and more so toward the end of the book. That girl almost got on my last nerve. I am aware of her age, naivete and the reason for her fear and trust issues, but come on. She and her sister have been on the run and hiding for so long that she should have had a bit more strength and backbone. But that was just my feelings when reading it. My opinion.

But I really did get into this story and (like Kalkin wanted to beat his brother's butt), and cannot wait to read the next book as there are many unanswered questions, side characters that you get to know and really like and want to know more about. And there's the Caden/Danielle problem that needs to be settled.

I found this book really enjoyable and really do recommend this read to anyone who loves shifter reads.

TL Reeve: TL Reeve, a best-selling, multi-published author, was born out of a love of family and a bond that became unbreakable. Living in Alabama, TL misses Los Angeles, and will one day return to the beaches of Southern California. When not writing something hot and sexy, TL can be found curled up with a good book, or working on homework with a cute little pixie.

Michele Ryan: Michele Ryan is an author with Decadent and After Glows Publishing. She embraced her creative passion and co-authored several books with fellow author TL Reeve. Michele has also published two solo novellas. Michele is a lifelong resident of the state of New Jersey, along with her husband and three children, whom she refers to as her hobbits. When Michele is not plotting or writing, she can be found either volunteering at her children’s school or reading.