A Steel Heart
from Amie Knight

This Exciting Standalone is LIVE!

Five seconds.
A deafening blast. Pain. Silence.
That was all it took for an IED to end my life as I knew it. The man I was shattered in a hard wave of sound and debris that rained down on me like death itself.
And six months later, after waking up to an inescapable hell, I found myself wishing that death had found me.
Until her.
Miranda Jacobs swept into my life like a cool breeze on a smoldering day.
With her smart mouth and her ridiculous jokes, she brought me back to life one minute at a time.
Turned out time wasn’t on our side.
Five seconds.
Screams. Twisted metal. Silence.
And I’d lost it all again—only this time, I had no one to blame but myself. 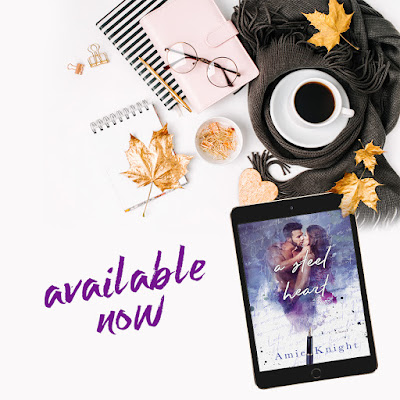 “What are you doing today?” my friend Ainsley asked through the cell phone that was pressed to my ear with my shoulder. My hands were busy holding open a piece of the blinds so I could look out the front window.

I gave her a distracted answer. “You know, the usual. Edits and whatnot.” I tilted my head to the side to get a better view out the window and almost dropped the phone. Holy hotness.

I snapped the blinds closed and backed away from the window. “No. Of course not. Why would I do that?”

“You told me you weren’t going to do that anymore.”

I thought we’d already established I was a liar.
I stepped back toward the window because I couldn’t help myself, obviously a glutton for freaking punishment. But this was the only time of day I saw him besides when he left in his big, black truck at three in the afternoon on the dot, and I didn’t want to miss a thing. I cradled the phone with my shoulder again, pushed the blinds apart with my hands, and pressed my face to the windowpane like the creepy stalker I was. And there he was. Every gorgeous inch of him.
He walked toward my building from across the busy downtown street like a tall glass of water on a hot day. All swagger and supreme male beauty. The kind of beauty that made a girl’s breath catch and heart pitter-patter. He pushed his dark hair off his tan forehead and the big muscles in his arms bunched.

Goosebumps broke out on my skin and I may have whispered, “Christ on a cracker.” I didn’t know his name, but I knew his schedule like the back of my hand. That wasn’t weird at all.
“You’re a terrible liar.” She giggled. “What’s he wearing today?”
I barely heard Ainsley. Every morning when I watched this man walk down the street and toward our building, it was like just he and I existed. Slow motion. Our own sexy theme music. Nameless, ridiculously hot man and Miranda. He didn’t know it, but there was a world of our own and it was the absolute best part of my day.

“Sunglasses. White, tight, sleeveless T-shirt. Black running pants with three white stripes down the sides. Black tennis shoes,” I said breathlessly into the phone. I left out all the good bits. Like the scowl he was wearing. It was perpetual. I’d never seen the man smile in the month he’d been living next door to me and for some reason that made me all the hotter for him. He owned that scowl. He freaking rocked it. His jaw was square and clean-shaven. His mouth flat. He was a giant of a man. Well over six feet. His chest was wide, his arms thick and imposing. Dog tags jangled from a silver necklace around his neck, letting me know he was military of some sort. I’d never seen his eyes, but I knew they were going to be stunning. Everything about him was. Not even the slight limp in his gait as he made his way across the street took away from his godlike beauty. I could’ve eaten him with a spoon.


What a beautiful story. So well written with a storyline that will have you turning page after page and wanting to call in sick to work so you don't have to leave these wonderful characters for later. The story line was not only romantic and hot, but it was really quite entertaining, giving you a few giggles with the dialog and a couple of the situations. My favorite part of this book was Holden's book, the story of them. It was so sweet and heartwarming that I fell all the way in love with this man.

These characters are well written and very well defined. Miranda is smart, curvy, beautiful, witty and just as sweet and good hearted as can be. Holden is hard, broken, terribly handsome, grumpy and a little intimadating. But he is also sweet, caring, romantic and a beautiful soul. He also suffers from PTSD and suffers from nightmares most every night, leaving Miranda to think he's having sex since they share the same bedroom wall.

Theirs is a love story that outshines all of the romance stories that Miranda reads and edits. Theirs is special. Theirs is true love, mad love, deep love. I cannot recommend this book highly enough. I give it 10 stars for the swoon worthiness and "aawwwwwww" factor.

Read Today for only 99¢!
(Free in Kindle Unlimited)

Amie Knight has been a reader for as long as she could remember and a romance lover since she could get her hands on her momma's books. A dedicated wife and mother with a love of music and makeup, she won’t ever be seen leaving the house without her eyebrows and eyelashes done just right. When she isn't reading and writing, you can catch her jamming out in the car with her two kids to '90s R&B, country, and showtunes. Amie draws inspiration from her childhood in Columbia, South Carolina, and can't imagine living anywhere other than the South. 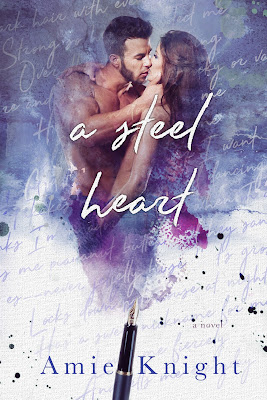