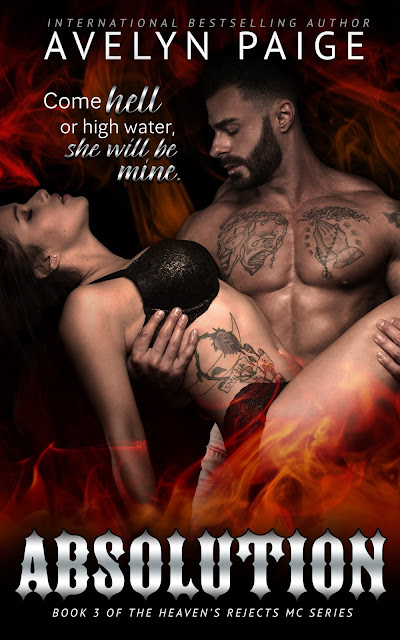 RICCA
You can’t outrun your past, a mistake I learned the hard way.
Stripped of my innocence in the middle of the Californian desert, I waited for death.
Then he appeared.
My vengeful angel.
He’s everything I’m not.
He’s everything I want.
He’s everything I can never have.
RATCHET
I will not let my past define me.
Abandoned by my mother as a child, I would be dead if it weren’t for Jagger. He took me into the Heaven’s Rejects and saved my life.
Now I want to save hers.
The superficial cuts and bruises on her delicate skin, don’t compare to the pain lurking in her heart.
The pain I want to save her from.
Somehow, I will find a way to get through to her.
Come hell or high water, she will be mine.

Add it to your TBR
https://www.goodreads.com/book/show/33865776-absolution

I was so excited when Absolution his my Kindle in the wee hours. And Holy Cow it did not disappoint!!!! What an amazing addition to the Heavens Rejects Series. Ms Paige has written a thrilling storyline and of course all the major characters from the series add present. In true Avelyn Paige fashion, she has written about characters will worm their way into your heart and hold on tight. Their story will have you smiling, your toes curling and your heart in your throat at various times throughout the chapters.

Ratchet is the MC’s enforcer and a typical alpha badass! Except when it comes to his woman. For Ricca he would bend heaven and earth to his will to protect her and give her what she wants. Ricca, his woman, is a strong, tough independent woman who has overcome so much in her short life. In Absolution these two must dig deep to overcome past demons and fight even harder to even hope for a happy outcome. But if life has taught them anything it’s to never give up and to never lose hope.

I can’t express how much I loved this book. Simply put it has it all. Kudo's to Ms. Paige for a job very well done. I highly recommend reading this as well as the rest of the series; you won’t regret it. 2 Thumbs Up for this fantastic read and may I just say that this reader is anxiously awaiting the next book from the Heavens Reject MC series! 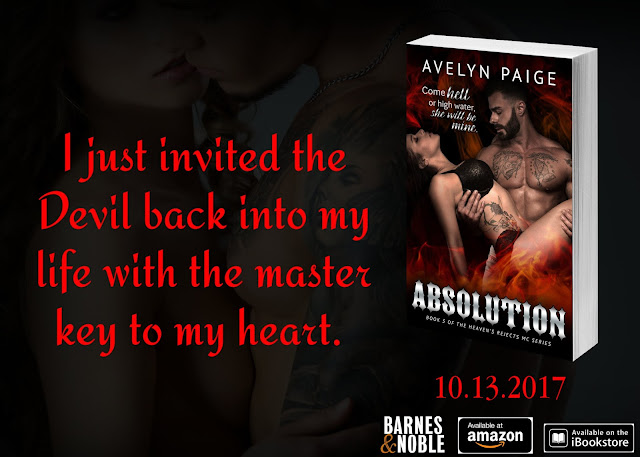 “You’re okay. They’re dead and can’t hurt you anymore,” I mumble and repeat in some stupid fucking mantra to keep the memories at bay. Every morning starts like this. Sure, maybe I did need go back to my victim group counseling sessions, but I knew the Kumbaya mentality they used couldn’t help me. The demons in my head were of my own creation, and they were never just going to go away by telling others who thought they were like me about them. I couldn’t forgive the men for the things that they did to my body and even with their deaths, my mind would never be able to see the world the same way. They took the last shred of my innocence out in that desert, and it was something that I was never going to be able to get back, even if I had ruby red slippers, clicked my heels, and said it three times.

Life isn’t a fucking fairy tale. And no matter how hard I hoped he would be, Ratchet was definitely not Prince Charming. The knight in shining armor isn’t real, and he was never going to ride a horse to my tower of terror.

Avelyn Paige is a born and raised Indiana girl. While she may be a Hoosier by birth, she is a Boilermaker by choice. Boiler Up! She resides in a sleepy little town in Indiana with her husband and three crazy pets. Avelyn spends her days working as a cancer research scientist and her nights sipping moonshine while writing and book reviewing. Avelyn loves everything paranormal, Cajun culture, and wants to try tornado chasing as a hobby when she finally grows up. She just has to get over that pesky fear of thunderstorms first. Avelyn also enjoys collecting voodoo dolls from her trips to New Orleans.

Hosted by: Saints and Sinner Books