King of Code, an all-new
intriguing and sexy standalone
from CD Reiss is LIVE!

From New York Times Bestselling author, CD Reiss, comes a sexy tale of secrets, intrigue, betrayal, and a love worth crossing a continent for.

Taylor Harden is a man on the edge.
The edge of fame. The edge of untold wealth.
The edge of utter humiliation.
He built an unhackable system, and in front of everyone, it’s hacked.
His reputation goes from king to goat in a split second. Boom. Like that.
Some dude in Barrington, USA (AKA Nowhere) has locked down Taylor’s code, and if he doesn’t get it back, he’s going to be wearing a monkey suit for the rest of his life.
Except, this guy? This hacker from Nowhere? He’s not a guy.
Harper Watson’s all woman. And she has a plan for Taylor, his code, and his body.


“About time!” the older lady shouted.
“Is Harper back?” I asked, handing the bags to the blushing redhead.
As if summoned, Harper came through the swinging door, keeping it open so everyone could get past. She looked at me through the screen.
“You coming in?” she asked.
“We need to talk.”
“Did the decryption key work?”
The door slapped closed behind her as she came out, and we were alone. The way the setting sun hit her cheeks made her glow, and the strands of gold hair at the edges looked translucent. She belonged on a postcard.
I kept forgetting she was holding me hostage. I kept forgetting I needed to think strategically. I had more at stake with this girl than I’d ever had with another.
“Did you doubt it would work?”
“Not really. I’m just making conversation.”
“What are the thorns about?” I pointed at the thorn bed that had eaten my phone and went down the stairs to the yard.
She came after me. “Don’t you have these where you’re from?” She snapped a dry twig off the end.
“Roses? Yes. Impenetrable, groomed thorn bushes in our yards? No.”
“It’s not normal to give the gardeners in town something to do?” We walked around the perimeter.
“You are not normal.”
“It still blooms in spring. It’s really nice. You should see it.”
We were at the back end of the yard, where the very top of the factory’s roof cut the horizon.
I took her hand, pulling her to a stop. “Harper.”
“Taylor?” Her hair flew in her mouth when she turned, and she drew her finger across her cheek to get it out.
What was I supposed to tell her again? That I knew we’d interviewed her. That I didn’t give her the job despite her having a leg up on everyone else we saw.
But was I contrite? Accusatory? Was I just going to relay information? What did I want out of her after I told her I knew?
“Thank you for helping today,” she said. “If you’d asked me when we met, ‘Would Taylor Harden help clean the factory?’ I would have said, ‘No, not for any reason.’ But there you were. Pushing a broom. Scooping up shit. Not being an asshole.”
“My watch was at stake.”
“Yeah. Whatever. You can say what you want to keep your reputation as a shithead intact.”
“I have a reputation as a shithead?”
“You know you do.”
I did know it, and I reveled in it.
She faced me and put her other hand out. I took it, holding both hands between us. I couldn’t help it.
“Well, you guys are such a bunch of sad sacks I had to help. And let me tell you, every guy in Barrington has a little asshole in him. Trust me. I’ve played pool with them.”
“I want to say…” She stopped herself as if she really didn’t want to say. “Let’s get together tonight and get you another decryption code. But… saying this is stupid.” She bit her lip.
“Say it anyway.”
“The sooner you get four codes, the sooner you leave.”
I looked at our hands so I wouldn’t have to look at her.
“I’m not sure if I want that,” she said. 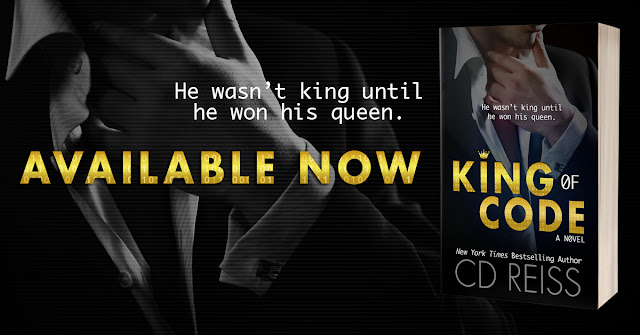 This was a really interesting, technically intriguing mystery of not only who done it, but WHY??? This story was very well written with a different storyline from anything I've read to date. The storyline characters are well developed and really quite likeable (well maybe one is a little shady).

Taylor is smart, handsome and successful and about to become the king of kings with this new endeavor. Harper is beautiful, smart, in a bind and has something in common with Taylor...she went to MIT when Taylor was there. They have something else in common, but you will have to read the book to find out what. Also who and why!

But don't think that is all about codes, binary numbers and such, because to get pieces of the codes, sex must be taught. Yes, it's a tough job but someone has to do it... lol

This is a really good read and I thoroughly enjoyed it and I know you will too. I highly recommend it.

What a very exciting book! It was like reading a puzzle inside a puzzle. Very interesting concept that held my interest to the very end. The book is Very Well written, with a great storyline and characters that you can’t help but love (even if you want to just smack them in the head a time or two). It’s what I like to term a “so much more” book. It’s so much more than just a suspenseful romance. Every time I thought I knew which way the plot was going, sure enough I ended up either totally wrong or a little off track. The plot kept me on my toes and the characters kept me reading.

Taylor is about to become “The King of Code”. He’s written a code that can’t be hacked and is about to launch it to the world. Or so he thinks. When the system is tapped into, Taylor tracks the hacker to a little town in the middle of nowhere But what he finds is nothing near what he was expecting. He follows the path to Barrington. A town that is slowly dying due to the local bottling plant going under a few years back. Surly no hacker is in this ghost-town. But what he does find is the sexiest woman he’s ever seen, Harper. Trouble is, Harper is anything but what she seems - is she his nemesis or his future? The tug of war and chemistry between Harper and Taylor explodes on the pages. The twists, the romance and the life lessons learned will keep you glued to the pages. Simply an amazing book and I look forward to more from this series in the future. 2 Thumbs Up!

CD Reiss is a New York Times bestseller. She still has to chop wood and carry water, which was buried in the fine print. Her lawyer is working it out with God but in the meantime, if you call and she doesn't pick up she's at the well hauling buckets. Born in New York City, she moved to Hollywood, California to get her master's degree in screenwriting from USC. In case you want to know, that went nowhere but it did give her a big enough ego to write novels. She's frequently referred to as the Shakespeare of Smut which is flattering but hasn't ever gotten her out of chopping that cord of wood. If you meet her in person, you should call her Christine.