Haunted by PTSD and a failed marriage, Luke Hamilton returns home to Laurel, Montana. Going home isn’t an easy fix, but it beats ending up in prison or dead. At first the familiar surroundings and open land seem to set things right, but soon his old demons rear their ugly heads and he realizes it's the wrong time to enter any relationship.

Leah Morgan’s experience in the corporate world has prepared her to prosper her father’s ranch in Montana. She knows everyone expects her to fail, but nothing will stop her from turning the ranch around and selling it to the highest bidder – especially not a rancher. The quicker she closes the deal, the sooner she can get out of Laurel and move on with her career.

But when Luke and Leah cross paths, they both discover that starting over can be a complicated business. 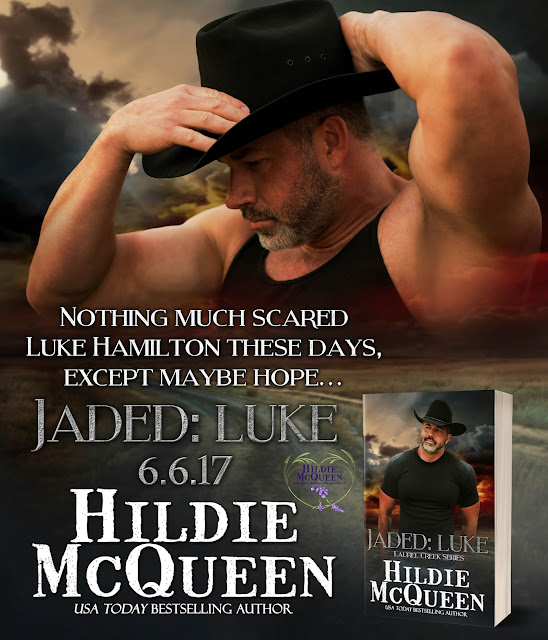 Needing fresh air, Leah went to the front door and stepped out to the wide porch that ran across the entire front of the house.  Although some of the white paint on the walls and columns was chipped, it remained steadfastly beautiful. The wide porch with rockers had always made a perfect first impression to the graceful home she’d grown up in.
A truck rambled toward the house and she glanced at her watch.  Whoever it was came early.  The meeting was not for half an hour.
“Damn it,” she looked down at her worn jeans and bare feet.  She’d hurriedly pulled on a t-shirt and jeans to cook and planned to change before the meeting.  Too late now.
The truck stopped and a man surfaced.  Over six foot of muscles, tattoos with the blank expression of someone who would snap your neck and spit down your throat sauntered toward her.
Eyes wide, she took a step back.  This was not one of the Hamilton’s at least not someone she remembered.  Of course she’d seen Tobias and Taylor in the last couple weeks.  Luke, Tobias’ twin was gone, lived in Texas, or somewhere south last she heard.
“Who are you?” She said having made it just inside the doorway with one hand on the doorknob so she could close it before he reached the porch.
“He stopped in his tracks giving her a chance to study him.
This was not your typical Montana rancher.  Instead of a Stetson, he wore a baseball cap.  No plaid shirt for this man, instead his form fitting black t-shirt, left no illusions of the muscular body underneath.  If it weren’t for the flatness in his eyes and the stoic expression, she’d find him utterly gorgeous.
At the moment, however, she’d describe him as more of a serial killer than a hunk.
A hunky serial killer.  She moved back and closed the door a bit.  “Who are you?”
“Luke. I’m Luke Hamilton.  And you’re Pesky Morgan.”
No one had called her that since...well since middle school.  Then it was Luke Hamilton who’d started everyone at school calling her that.”
“I hate that nickname.  Don’t ever call me that again.” She relaxed and opened the door wider.  “What are you doing here?  Where’s Tobias, or Taylor.  We have a meeting.”
His wide shoulders lifted and lowered and his upper lip lifted in what she could only describe as an Elvis snarl.  “Neither want to deal with you.  So they sent me.”
“From where?”
“From Hell. I’m the devil.” His right eyebrow rose, the only hint he was kidding.
Leah blew out an annoyed breath.  “Well come in Lucifer.  I have to get brownies out of the oven.”

Bestselling author Hildie McQueen loves unusual situations and getting into interesting adventures, which is what her characters do as well. She writes romance because she is in love with love! Author of Romance in Highland historical, Western Historical and contemporary, she writes something every reader can enjoy.

Most days she can be found in her pajamas hiding from deliverymen while drinking tea from her David Gandy coffee mug. In the afternoons she browses the Internet for semi-nude men to post on Facebook.

Follow the tour HERE for exclusive excerpts and a giveaway!