One Click your copy for ONLY 99c/99p
or read FREE with KindleUnlimited
and find out if two damaged hearts
learn to beat as one or is the damage too severe? 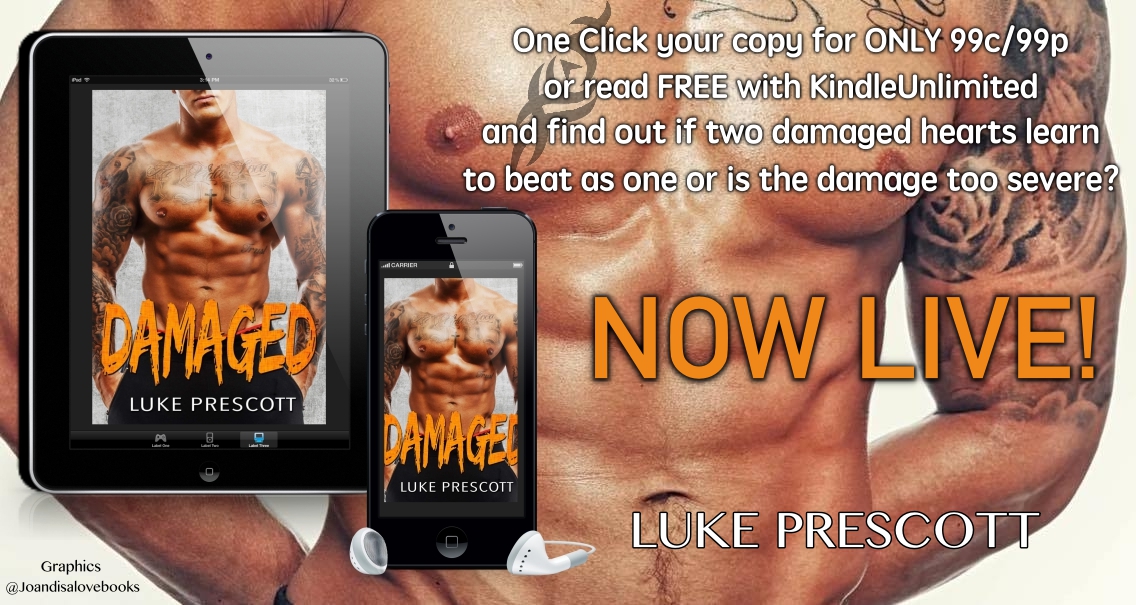 I’m damaged. Bad goods. Not good enough for anyone. Brett Daniels is a player with a capital manwhore. The idea of being with just one woman is something that he’d never entertain. He’s out looking for a new wingman, since he lost his to a woman. He won’t make the same mistake, hell no. It’s all about sex, having fun. Forgetting. I’m damaged. Bad goods. Too much for anyone to deal with. Eva Chapman is back in the game. She’s had a hell of a year and she’s ready to make the most of it now. Too much has been taken from her. She’s not willing to give up anything else, for anyone. It’s time for sex, and fun. Anything to help her forget. When Brett meets up with his old friend Eva, he knows he’s found his wingman. A secret, sexy weapon no one will see coming. Not even him. Can two damaged hearts learn to beat as one or is the damage too severe?

Add to your TBR shelf on Goodreads
http://bit.ly/DamgedGoodreads

Brett Daniels. I haven’t seen him around in a while, but as soon as I heard the yelling when I was in the bathroom, I knew who it was. I didn’t need to even hear his name, I just knew it. He’s a player...the player. I’ll admit, he’s good at it. Good enough that if I hadn’t been friends with him since middle school, I’d fall for it all too. The tattoos covering his muscular body, that messy black hair, the facial hair that he keeps trimmed close to his face, and those bright blue eyes. Yeah, he’s fucking hot by anyone’s standards. It’s a good thing I’m immune.

Luke Prescott grew up in New York, where he still lives today. He likes to fish, work on his Jeep and cheer on the best damn team in the NFL, the Giants. He spends his days getting his hands dirty and his nights using his dirty mind. Writing is a new-found interest for him. Realizing how sexy the written word can be, his imagination took over. He’s got plenty to tell and looks forward to sharing it.

Thank you for touring with Jo&Isa♡Books
https://www.facebook.com/JoandIsalovebooks/
Posted by Barb at 8:00:00 AM