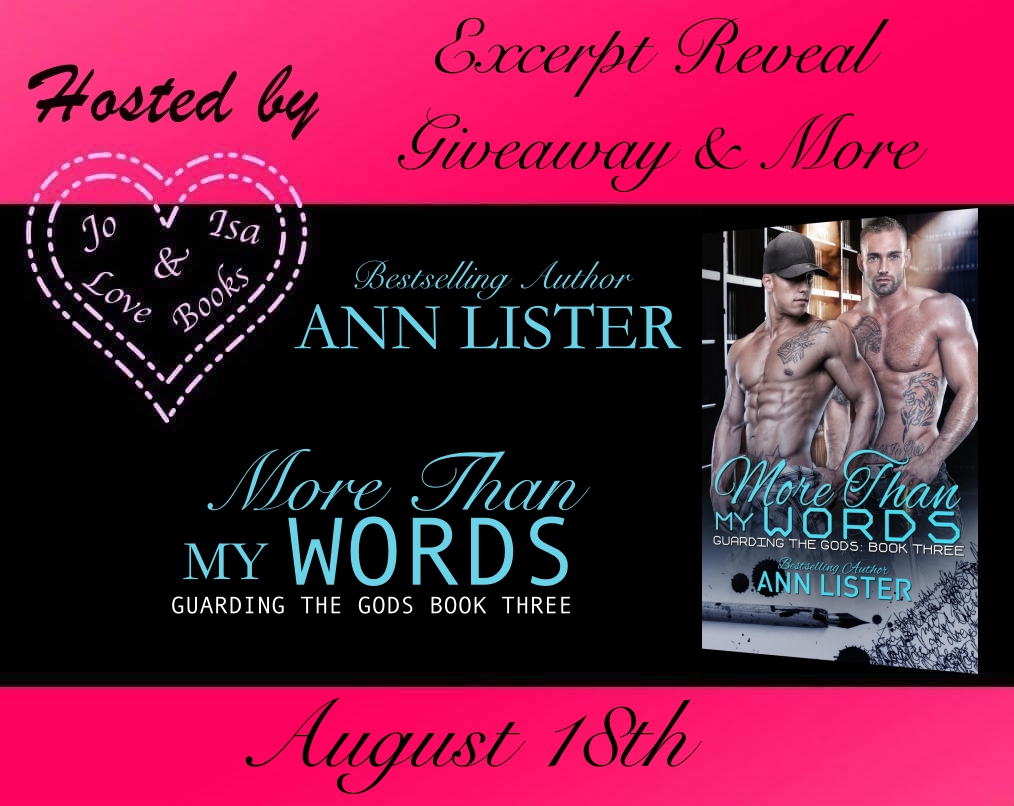 Read an excerpt from More Than My Words,
Guarding The Gods Book Three
by Author Ann Lister.

She also has some exciting news and surprises
for all readers and fans of all things ROCK!!

More Than My Words
Guarding The Gods ~ Book Three
Copyright © 2017 by Ann Lister. All rights reserved.

* Unedited and subject to change. *

Mason arrived back at Tessler's building just after eight o'clock that night. He'd put in a few hours of office work at Ventura Security, then home to shower and change for his date with Tessler. Now he was sitting outside in the backseat of the car service sending Tessler a quick text message.

“Okay, I'll meet you out in front of the coffee shop.”

Mason eased from the backseat and thanked the driver before he shut the door. When he turned around Tessler was standing there with a huge smile on his perfectly tanned face. It made him remember how tanned Tessler said he was all over his body. No tan lines. He hadn't been able to get that visual out of his head since Tessler had uttered the words. And his cock was in total agreement–the image of Tessler's fully tanned body was definitely boner-worthy.

“You're just in time to see the sun set behind the hillside,” Tessler said. He held out his hand for Mason to take it, then started to tug him toward the entrance of the building.

They stepped inside and Mason was acutely aware that this was the exact spot where he'd kissed Tessler for the first time. That thought had barely registered in his head when Tessler had him pushed up against the brick wall and his lips slammed down on his. Swift and needy, Tessler took immediate control of their kiss with his tongue licking the crease of Mason's lips before sliding inside. Teeth clinked together while their tongues wrestled and they devoured each others' mouths. It was a decadent feast that had Mason's entire body on fire.

His cock ached for attention, but he couldn't bring himself to pull out of the kiss to even suggest they move upstairs. The slippery wet haven of Tessler's mouth already had Mason's nerves on overload. Suggesting more physical contact between them might possibly cause Mason to come in his pants, and did he really want to spend the rest of the night trying to hide the wet spot? This kiss was heaven and hell because it wasn't near enough to quench his need for the man pressed against him, but damn it felt so fucking good. It was Tessler who finally pulled out of their lip lock. His heavy pants of breath further heated Mason's already flushed face.

“I had to see if our second kiss would be as good as the first,” Tessler admitted in a hoarse voice.

Tessler chuckled and said, “It was even hotter.”

“I'd have to agree with that assessment, but we should probably do a little more . . . research to fully prove the data,” Mason said and grinned as wickedly as he could.

“Mmmm, then let's go,” Tessler said. He took Mason's hand and started to tug him down the hall toward the elevator.

Mason followed close behind Tessler with so many different emotions flooding his veins. He wondered where the night would take them, and if there'd be a second date. There had to be another date, right? With the kind of chemistry they shared, Tessler would have to want to see him again. There was no way in hell this was one sided or that he was imagining the attraction. Tessler was just as turned on as Mason was and he'd felt the evidence of that pressed into his hip just a minute ago by the doorway.

What's better than one author writing a rock star romance? TWO! And if you love collaborations between authors, then you are going to LOVE the upcoming project Ann Lister has planned with Sandrine Gasq-Dion!!

They've already shared their rock stars in each others rock series, but now they're going to collaborate and write a story together!!

One story. Two authors with rock stars. This story is going to ROCK!! It will be so packed with all your favorite rock star characters, you are going to lose your mind!

Are you ready for this? Get your backstage passes ready, because this story is coming at you soon!!

I have something BIG to reveal!!

How does a brand new website that's bigger and better than ever before sound to you? This completely new domain has space for all my men and even has space left over for a NEWSLETTER, too! The Home of The Rock Gods and the men who have their backs in Guarding The Gods will now be sharing this new space with the Gallo Brothers from the Band of Brothers series, along with my collection of M/F titles!!

Go check out the new pages and be sure to SUBSCRIBE to my new NEWSLETTER via my website! I can't wait to keep you all updated on all things Rock Gods and MORE so be sure to leave your email so we can make that happen! I hope you enjoy my Music Between The Sheets!! 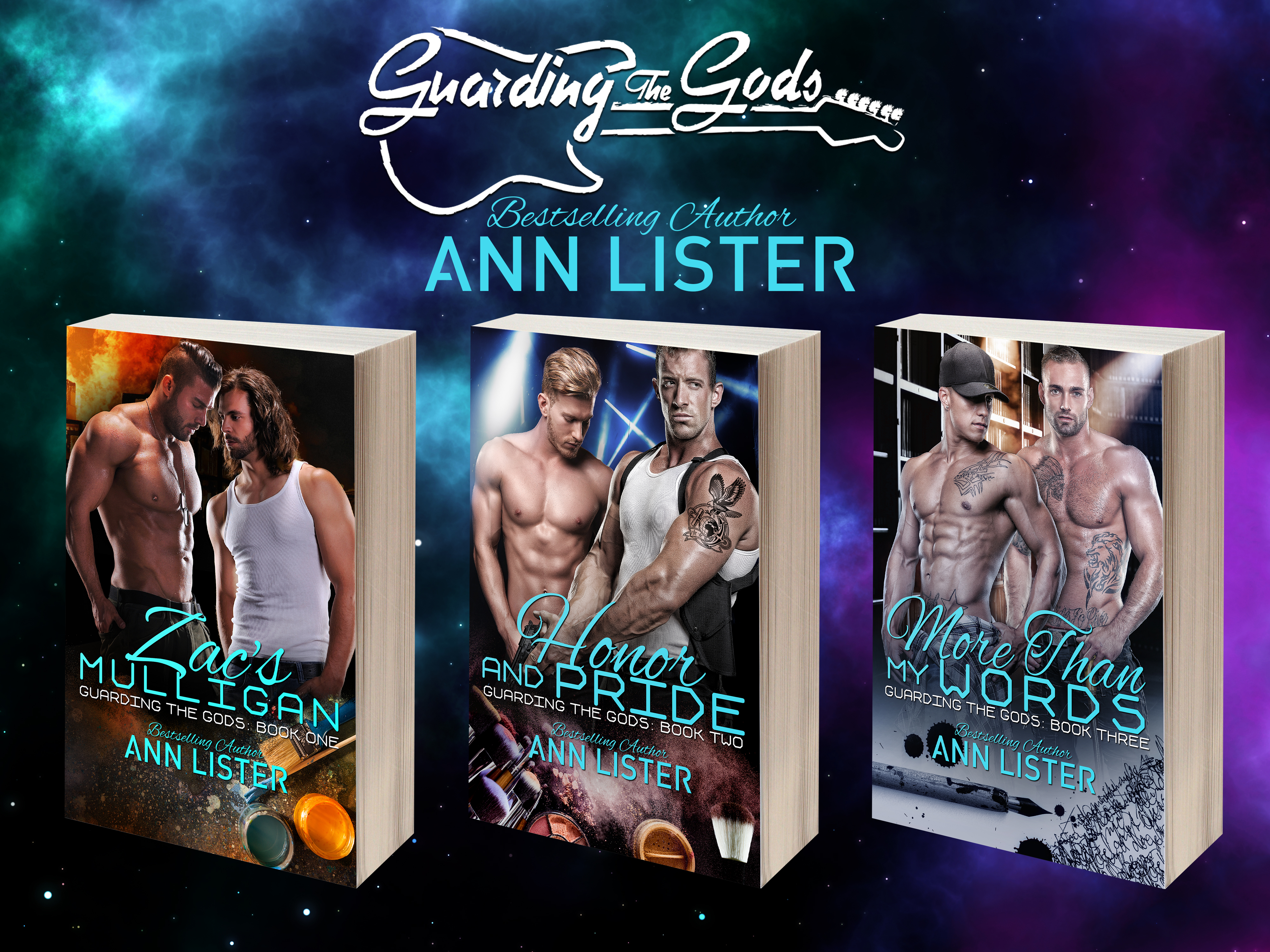 If you loved The Rock Gods now is your chance to read the spin off series from the men that have their backs. Read book 1 and 2 FREE with KindleUnlimited. 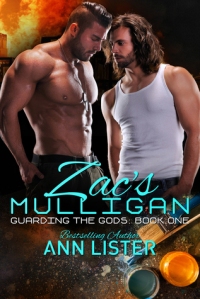 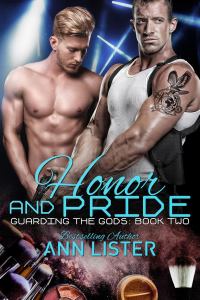 Ann Lister is a native New Englander currently living on the island of Martha’s Vineyard with her husband. She has pulled details from her years living in the New England area and uses many local settings and landmarks in her novels. After graduating art school, marrying, and raising two daughters, she established her own video production company. Her nearly two decades working in video production included work within the music industry and won her a coveted Telly Award. Her ‘behind-the-scenes’ exposure to the music world and her love of rock music is the inspiration for her erotic rock star romances.

The Rock Gods series gave her Bestselling Author status on Amazon. Beyond The Music, Book 7 in the series, hit #1 in the Gay Erotica genre during the Pre-Order and held that spot for several weeks. This last book in The Rock Gods series launches the spin-off series, Guarding The Gods, which releases in early Summer of 2016. Fall For Me, Book One in the series was a Finalist in the 2013 Rainbow Award. Each book in this series brings her two favorite elements together: musicians and the love between two men. These stories focus on what it truly means to love; love unconditionally, love without restrictions or labels, love without fear or judgment – to just simply love.