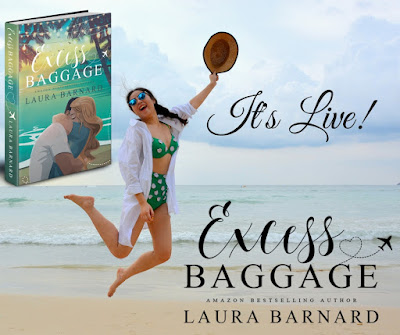 Win a SIGNED PAPERBACK & Amazon voucher (Details of giveaway below).

'An absolute must read this Summer!' Lady Living in Bookland

'Quintessential British humour, I felt like I was on a girls holiday with my own chicks.' Persuing Princesses Book Blog

'Almost made me pee myself I laughed so hard!' Shelly's Book Corner

Stuck in a dead-end relationship, Erica Bennett finds herself daydreaming of her first holiday romance. She was fifteen, it was exciting, new and full of possibilities…and Jack Lawson was hot as hell. That kind of thing leaves a mark.

So when her friends suggest a girls holiday to Luna Island, it’s exactly what she needs to take her mind off things. What she doesn’t expect is to spot Jack – a much older, hotter version of him – across the hotel lobby.

Their attraction is still there and it isn’t long before sparks fly, but fifteen years is a long time. They aren’t the same people they were back then and besides, it’s only a week, right?

Is it a second chance at something real or will their excess baggage ruin their shot at love after they leave Luna Island?

Check out the reviews on Goodreads -
https://www.goodreads.com/book/show/34994195-excess-baggage

The author has written a Fun and Flirty story about a couple that had a summer fling as kids and meet by accident while on holiday years later with their friends. Erica and Jack have moved on from that summer years ago and have lives and obligations but seeing one another brings back all those First Love feelings. But do you ever really get over your first love? Especially if they are the one that got away?

This is a well written story with a great cast of characters that you can't help but like, even if they really don't act their age in maturity very often. The fun, the laughter the crazy antics and banter makes this a very entertaining read. 1-Click Excess Baggage, for a fun read!

I really wish they allowed half stars but alas they don't so I will start off by saying my score is 3.5 stars.

This story was really well written with a very promising story line. The premise of young teenage love finding each other 15 years later would be a wonderful second chance story. Even with this particular story and the things that they did, their "adventures", and maybe some portions of their friend's involvement and interactions would work. However, it's the characters that put me off. At first it was fine, everything was good and they find each other at the same hotel, yet this could work. But once I found out that this is 15 years later and these people are in their early thirties, I had a very hard time with this book.

The lead characters Erica and Jack's characters actually worked my nerves with their childishness and apparent immaturity. The thing is, I really liked the characters apart from each other and thought that they were well written and well defined, until they opened their mouths and became 30 year old teenagers! And their friends would be the perfect mix of friends, if they too would have acted their age. And Evelyn...I could not stand that woman! She was like the best friend from hell! And I am laughing about this one. I get why she was upset about Erica and Jack, but man, she was like a pit bull with a bone and just would not let it go!

Granted it was a quick read, and there were so many things that were just laugh out loud funny, it would have been better if these characters were much younger, like early to mid twenties. Of course, this is just my opinion. I am sure that there are many, many people would will love it just the way it is.

Head on over to Laura's facebook page to enter her release day giveaway to be in with a chance of winning a signed paperback of EXCESS BAGGAGE and a £5/$5 Amazon gift card. 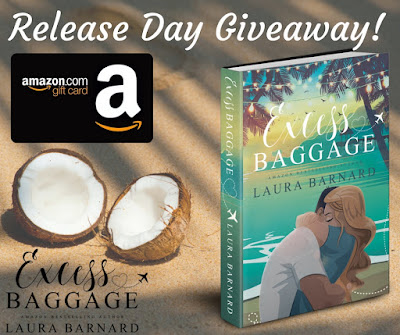