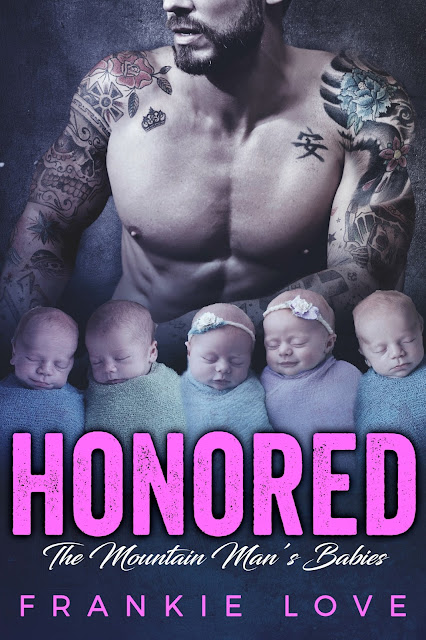 When my cousin Jax bails me out after a bar fight, I head to his middle-of-nowhere cabin.
Not my first choice—but who knows, maybe I’ll become a real fucking mountain man.

I’m not the only person staying at Jax’s place.
His wife’s cousin, Honor, is here too.
Suddenly this mountain is looking a hell of a lot better.

When Honor tells me her life is complicated it’s the understatement of the century.
Besides having a tender heart and the face of an angel, she’s a sister-wife, on the run from her ex, desperate to give her children a better life.

I’ve spent the last few years fucking around while Honor’s been raising her babies.
It’s time for me to get my shit together.
No one thinks Honor should get involved with another man, especially a man like me.

But they don’t understand—Honor is my woman now.
And I’m not leaving this mountain until I have her.

99c for a limited time only

I have to admit I love Frankie Love’s Mountain Men stories and Honored is no exception. This is Hawk and Honor’s story. Hawk is a basically a good guy with a bad-boy image and a knack for being in the wrong place at the wrong time that often lands him in trouble. Honor is a young mother with 3 boys that is on the run from her ex who has 3 so called wives and has turned their church foundation into a cult.

From the moment Hawk and Honor meet they both know they have met someone special, as if fate brought them to that moment in time. But their pasts, their families and some major misunderstandings seem to always get in the way. Do these two young kids stand a chance at happiness, can Hawk become the man Honor deserves and a father figure to her boys? And what about Luke, the boy's father and cult leader, will he just let them go? So many questions! I highly recommend this wonderful story of love, loss and willingness to become a better human being. 2 Thumbs Up!