Now Live - Gas Up the Jet, Baby by Aubrey Parr 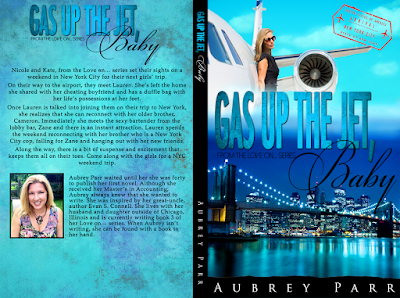 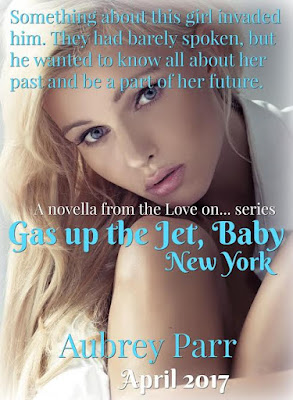 Nicole and Kate, from the Love on… series set their sights on a weekend in New York City for their next girls’ trip. On their way to the airport, they meet Lauren. She’s left the home she shared with her cheating boyfriend and has a bag filled with her life’s possessions at her feet. Once Lauren is talked into joining them on their trip to New York, she realizes that she can reconnect with her older brother, Cameron. Immediately she meets the sexy bartender from the lobby bar, Zane and there is an instant attraction. Lauren spends the weekend reconnecting with her brother who is a New York City cop, falling for Zane and hanging out with her new friends. Along the way, there is a bit of suspense and excitement that keeps them all on their toes. Come along with the girls for a NYC weekend trip. This is a spin-off novella from the Love On... series, but can be read as a standalone.

Lauren shot glances around the elegant lounge as the three women sat down. The sexy bartender was nowhere to be found. He wasn’t conventionally sexy. He wasn’t exactly the tall, dark, and handsome look. She couldn’t put her finger on it. Something had caught her attention. She kept looking for him, trying not to be obvious, hoping his shift hadn’t ended. Then her heart practically leapt out of her chest as he wandered in from the back. Behind the bar in the middle of New York City, wearing a white button down with the sleeves rolled up under a black vest (usual bartender attire), he could easily be walking down the beach in a wet suit with a surf board under his arm. He looked like he should be a beach bum in Hawaii rather than a bartender in New York. She half expected to see him shake sand out of his hair. Maybe that was it. Something was relaxed and casual about him, and she was drawn to it. Joking with herself, she thought how easily he could take her mind off her breakup with Tim.

Focused on cleaning the glass in his hand, he didn’t initially notice his bar guests. He heard people settling into seats, and a smile came over his face when he saw the adorable woman from the lobby. In jeans and a t-shirt before, she looked just as gorgeous then as she did now in her little black dress. He wanted to grab ahold of her soft skin and kiss that enticing red lipstick right off her lips. Beautiful women were a dime a dozen in his bar, but something about her made him take notice.

Their eyes locked, and he went to stand directly across the bar from her. At that moment, the other two women didn’t exist. “What can I get you to drink, beautiful?”

Kate noticed Lauren’s rosy cheeks blush deeper as she smiled back to the bartender. He was handsome, that fact hadn’t escaped Kate. But handsome men just didn’t have the same effect on her after Dominic.

Nicole cleared her throat to catch his attention and smiled. “We’re in room 2105. She’ll have top shelf, please. I’d love a Malbec, and she’ll have a dirty martini. Thank you.”

As Mr. Bartender made their drinks, Lauren didn’t want to make a big deal out of the gesture, so she gave Nicole’s thigh a quick squeeze and whispered a “thank you”. Nicole winked and mouthed, “You’re welcome.”

The three friends chatted and ordered a few appetizers while they enjoyed their drinks. The plan was to do some NYC shopping, and Nicole insisted that they grab a few things for Lauren while they were at it.

“She loves to dote,” Kate joked. “Just let her. It’s easier that way.”

“Should I take that as a compliment?” Nicole asked, pretending to sound offended.

“Of course, you should.” Kate focused on Lauren again. “She did the same thing to me before I was married. She always insisted on getting me outfits when I’d go out to visit wherever they were staying at the time.”

“I have a ‘what’s mine is yours’ mentality, is all.” Nicole shrugged her shoulders, smiling.

When Mr. Bartender put the food plates down, Nicole responded first. “Thank you… what’s your name?”

“Oh sorry, ladies, I’m Zane, and you are?” Though Nicole asked the question, he looked at Lauren when he answered.

“Hi, Zane,” she said. “I’m Lauren, nice to meet you.” Holding out her hand, she held her breath while she waited for her body to react to his touch. Somehow, she knew there would be electricity between them. She wasn’t wrong. She felt the shocks all the way to her toes. “These are my friends, Nicole and Kate.” Lauren forced herself to be polite through the shockwave. Both women exchanged hellos with Zane.

The way Lauren said his name instantly made him hard. Hearing it fall off those lips, he wanted to pull her into the back and ravish her body in the cooler. He had an unfulfilled fantasy of doing it somewhere in the bar. When he shook her hand, he had to keep his entire body in check.

“How long will you be staying here?” Zane asked, trying to continue the conversation. Something about this girl was invading him. They had barely spoken, but he wanted to know all about her past and be a part of her future. She was young, he could tell that. But her eyes showed that she was an old soul. Not that he was a grandpa yet; he was only thirty-two. He wondered if she had a cut-off age when going out with a guy, and if he was below it.

Aubrey Parr waited until her she was forty to publish her first novel. Although she received her Master’s in Accounting, Aubrey always knew that she wanted to write. She was inspired by her great-uncle, author Evan S. Connell. She lives with her husband and daughter outside of Chicago, Illinois and is currently writing book 3 of her Love on… series. When Aubrey isn’t writing, she can be found with a book in her hand.