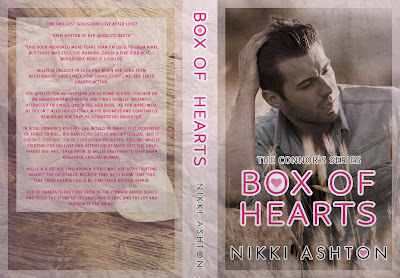 BOX OF HEARTS
BY: NIKKI ASHTON
OUT NOW: myBook.to/BOH


Millie is unlucky in love and when her long term relationship ends like a soap opera story line, she takes drastic action.  She applies for an overseas job as home school teacher on an American family Ranch and finds herself instantly attracted to Jesse-her boss.  As for Jesse, well he doesn’t need her getting in his business and constantly reminding him that he neglects his daughter.

In Jesse Connor’s eyes his life would be simple if it consisted of three things.  His ranch, his cattle and his horses.  But it doesn’t- for one, there’s his young daughter, Adeline, who is fighting for his love and attention because he’s the only parent she has.  Then there is Millie Braithwaite-that damn beautiful English woman.

Millie & Jesse are two broken souls who are both fighting against the inevitable, because they both know that this time their hearts could be shattered beyond repair.

Box of Hearts is the first book in the Connor Ranch series and tells the story of second chance love and the joy and sorrow it can bring.

Just WOW! Have you ever watched a TV program or movie and come away saying boy that kid sure made that show? Well I must say a spunky little 4-year old girl named Addy sure did make this book! Oh don’t get me wrong there was so much more to this storyline but little Addy sure does steal the show!

I give the highest of kudos to the author for this gripping, touching story that will have your emotions running the gambit. I went from laughing and smiling to crying and hurting right along with the characters of the book. The entire Connor family and ranch-hands will steal your heart as they struggle through life at the ranch while recovering from recent tragedies (especially little Addy). Sometimes it's seeing life and love through the eyes of a child that can ease even the toughest of situations and trust me life around the Connor Ranch is anything but easy - especially for a British nanny who's recently been jilted at the altar and a rancher whose lost the love of his life (Addy’s mom) due to a car wreck. But a little girls sassy outlook on life and her “box of hearts” just might win the day!

This is a 100% Must Read and I truly hope beyond hope the author has more in store for us from the sleepy little town of Bridge Vale and the Connor Ranch! I highly recommend 1-clicking this book - you won't regret it. And who knows, you just may come away with a new way of looking at love and happiness with your very own “Box Of Hearts”.


You know you have a hit when you have these three things in a book....hot guys, hot headstrong women and adorably precocious little girls! This book had just that in this well written story about a widower with a 4 year old daughter who has lost "the love of his life" and can't seem to get himself together to be with anyone, even his adorable daughter. But he does have one thing, a mom who is smart and needs help and puts out an ad for a nanny. How can this story go wrong, right?

The characters are well written and so very well developed that you can't help falling for them. Garrett, is Jesse's brother and he's just as adorable as he can be and such a sweetheart, but don't cross him or his family or anyone he cares about.
Jesse, well he's a hot alpha cowboy (rancher he would say), and he is broken and so closed off that he has closed himself off to his family, friends and daughter.
And then there's Millie...the nanny from England that, after being left at the alter, takes on the job as Addy's nanny so that she can get away from what she's been through.
Bonnie and Ted are parents that you would thoroughly enjoy having! They are great.
Ok..can't leave out Aunt Ruby, who at 84 has no filter when it comes to speaking her mind.

I absolutely adored this book, the characters and the storyline that will have you laughing, crying, wanting to shake the hell out of someone, and holding you heart as you say "aaawwww". Great book and I highly recommend this truly 10 star read (even though I can only give 5, it's a 10 for me).

In order to win a signed paperback AND $5 Amazon Gift Card just head on over to Nikki's page ( https://www.facebook.com/NikkiAshtonBooks/ ) to enter the pinned post. 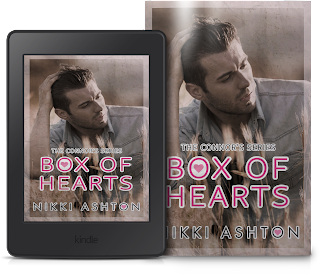