It's Live - Deception by S.E. Kloos 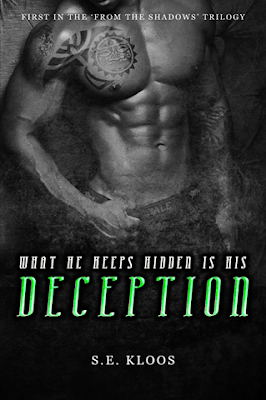 Deception
Book one of the 'From the Shadows' Trilogy
By: S.E. Kloos

Following what was literally the day from Hell, Jade decides a night out with a couple of girlfriends is exactly what she needs to put it all behind her. A chance encounter at the bar, though, would change the direction of her life for as long as he allowed her to live it.

There was nothing about him that screamed ‘stay away’. No red flags that warned everyone around him to keep their distance. His deep blue eyes were calming, his smile contagious, and his voice to die for. From across the bar, Jade had no idea that by responding to his call, she would find herself in the sights of something that defined the term ‘dangerous’.

I found this book quite intriguing and extremely well written. The story flowed, keeping you not only caught up in the plot, but also guessing as to just what this man was! His character was intense, to say the least, charming, erotically so and there was just something about him that screamed danger, but you tended to push that aside just as Jade did when he began his sexual ministrations on Jade. The female characters were well written and very well developed. Their banter with each other was funny, quick and sometimes sharp, but then they have known each other all of their lives and as two of them were sisters, Jade was just as close to them as though she were their sister as well. Their similarities made their friendship, their differences made them extremely enjoyable to read.

Blake is sex on the proverbial stick. He oozes sex, charm, danger and something else, but you will have to wait until the end to see what that is. He has staked his claim on Jade and when all is said and done (and it is done quite often, and quite descriptively), he tells her he is selling his house and moving away…and he wants her to go with him. She has a choice to make and begins to run out of time. She has so many things that she has to do, she’s uncertain, she doesn’t want to leave her friends, her job but she doesn’t want to lose him either. Once her decision is made, she has to tell him, and that is when things become known and you will find yourself sitting with your mouth hanging open.

Wonderfully captivating book and I cannot wait for the next book to see how this all plays out! Highly recommend this book!