Ten full-length novels, ten heroines at the right hand of destiny…
Whether you're slaying vampires or holding your own alongside superheroes, one of the best things about heroines is that they show us how strong, cunning, and magical they can be. This box set contains TEN complete novels, all gripping and intriguing stories with women rocking rebellions, handing out justice, battling shadow gods, and bending the wills of kings.

House of Diviners (The Diviners #1)

Kelsey Jackson Diviner is a shaman–a walker between worlds, a healer and protector.
But when she witnesses a gruesome attack on one of her own, she must become a hunter and track down the monster responsible for disturbing the delicate balance between the human and spirit worlds.

In trying to navigate her day job as a therapist and help pain-in-the-ass ghosts cross over by night, Kelsey draws the attention of a clandestine paranormal society and a mysterious man who calls himself the black dagger god.
Set in modern-day Los Angeles, this urban fantasy unleashes a blend of magic and thrills.

Madeline knew her life was strange, and not just because she could sense the emotions of others. Having people die by your hand on two separate occasions can make a girl question her very existence. Still, she never thought she'd wake up in a world straight out of Norse myth. A world where corpses reanimate all on their own . . . and she's supposed to be their executioner.

Voted one of 50 Self-Published Books Worth Reading 2016. Having bested beast, man, and even his own failings, King Bewilliam has restored his embattled kingdom, yet finds his life lacking. When a crippling famine threatens the Chalklands’ very survival, his vassals propose to seek aid from a distant monarch, unaware that the plan will reunite their king with a woman from his past: the Empress Alexandra, a formidable ruler in her own right. The expedition proves perilous and the king calls on his sole female knight, Dame Deidre, to face off against a murderous mob rabid with hunger. As treacherous as the journey is, the greater challenge comes when the king confronts a powerful woman whose love he spurned.

Brigit is supposed to become a wise woman but she longs for something more exciting. Diarmuid is a bard who accidentally brings his imaginary muse to life, only to discover that she isn’t the woman he thought she would be. Together they need to find a way to destroy the muse — if they survive the journey to find her.

Amaskan’s Blood (Book I of the Boahim Trilogy)

Adelei, one of the feared Amaskans, is sent into the hands of the Order’s worst enemy—her father. She tumbles dagger-first into the Boahim Senate's political schemes and finds that magic is very much alive and well in the Little Dozen Kingdoms. They say the truth depends on which side of the sword one stands, but they never said what to do when all the swords are pointing at you.

The Enclave (The Verge: Book 1)

Katherine Kirk lived only for vengeance. Vengeance against the man who destroyed her home, her family and her life. Sent on a babysitting mission to Junter 3, RAN officer Katherine Kirk, finds herself quickly embroiled in the politics between the New Holland Government and the Val Myran refugees claiming asylum. After an Alliance attack, Kirk and her team hunt the enemy down and discover that they have finally found the lair of the man they have been searching for...
And the captive who has been waiting patiently for rescue.
"What would you do to the man who destroyed every important person in your life?"

Convicted traitor Bo Barron will do whatever it takes to purchase her father’s freedom from his kidnappers, even assume the guise of a Kiara Joy Babe at a high-stakes gambling tournament. When a handsome stranger steals a kiss, everything Bo thought she knew about her assignment turns upside down. If she wants to save her father and keep herself alive, she’s going to have to figure out how to survive the game she didn’t realize she was playing.

Ghosts of Winter (Echoes of the Past series)

Deep within the city of Caerton, shape shifters hide in the guise of humans, secretly fighting to protect them from the unimaginable demons that threaten their world.
Caerton’s newest shifter, Stalker, faces an uncertain future; as her pack struggles to cope with their devastating loss, dark forces begin to mass in the shadows. Tensions with the Witches continue to threaten the north, while the young shifters desperately strive to determine which of the city's elders they can trust.

As an ancient and deadly evil emerges from beneath the city, Stalker and her new pack face a frantic race against the changing face of the moon. Can their demonic enemy be defeated? Heroes will rise in this, the second thrilling installment of the Echoes of the Past series, where creatures from our darkest nightmares stalk our world... 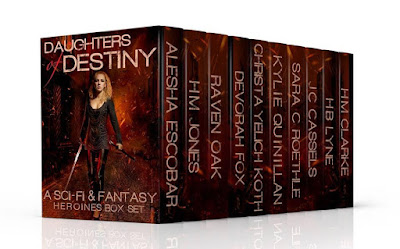 Alesha Escobar writes fantasy to support her chocolate habit. She enjoys reading everything from Tolkien and Dante, to the Dresden Files and Hellblazer comics.
She resides in California with her partner-in-crime, Luis Escobar, a 20-year art veteran on The Simpsons television show. Alesha is the author of the bestselling Gray Tower Trilogy, an action-packed supernatural spy thriller set in an alternate 1940's. The Tower's Alchemist, the first book of the trilogy, is now being adapted to screenplay.

Sara C Roethle is an author and part-time unicorn. She resides in the Land of Enchantment, as far from humans as possible. Sara is the author of the Bitter Ashes Series, the Xoe Meyers Series, the Tree of Ages Series, and the Thief’s Apprentice Series.

"What if?" Those two words all too easily send Devorah Fox spinning into flights of fancy. Best-selling author of The Bewildering Adventures of King Bewilliam epic historical fantasy series including “The Redoubt,” voted one of 50 Self-Published Books Worth Reading 2016, and ”The Lost King,” awarded the All Authors Certificate of Excellence. She also wrote the historical thriller “Detour,” co-authored the contemporary thriller, “Naked Came the Sharks,” with Jed Donellie, contributed to “Masters of Time: a SciFi/Fantasy Time Travel Anthology,” and “Magic Unveiled: An Anthology,” and has several Mystery Mini Short Reads to her name. Born in Brooklyn, New York, she now lives in The Barefoot Palace on the Texas Gulf Coast with rescued tabby cats ... and a dragon named Inky.

Kylie lives in Brisbane, Australia, with her pack of one husband, two dogs, and a cat. She spent most of her childhood wandering in fictional worlds but it was many years before she made the connection between her own made-up worlds and the written word. She will read almost anything but prefers a fantastical element, including magic, time travel and monsters. She is the author of the Tales of Silver Downs historical fantasy series and her 2017 releases include the paranormal fantasy, Speak To Me, and a fantasy series set in ancient Egypt. Her other interests include canine nutrition, playing the piano badly, zombies and organic gardening. She blames the disheveled state of her house on her dogs but she really just hates to clean.

Raven Oak
Amaskan’s Blood (Book I of the Boahim Trilogy)

Bestselling science fiction & fantasy author Raven Oak is best known for Amaskan’s Blood (Epic Awards 2016 Finalist), Class-M Exile, and the collection Joy to the Worlds: Mysterious Speculative Fiction for the Holidays (Foreword Reviews 2016 Book of the Year Finalist). She spent most of her K-12 education doodling stories and 500 page monstrosities that are forever locked away in a filing cabinet.

When she’s not writing, she’s getting her game on with tabletop games, indulging in cartography, or staring at the ocean. She lives in the Seattle area with her husband, and their three kitties who enjoy lounging across the keyboard when writing deadlines approach.

In the past, H M Clarke has been a Console Operator, an ICT Project Manager, Public Servant, Paper Shuffler and an Accountant (the last being the most exciting.) She attended Flinders University in Adelaide, South Australia, where she studied for a Bachelor of Science (Chem), and also picked up a Diploma in Project Management while working for the South Australian Department of Justice. In her spare time, she likes to lay on the couch and watch TV, garden, draw, read, and tell ALL her family what wonderful human beings they are. She keeps threatening to go out and get a real job (Cheesecake Test Taster sounds good) and intends to retire somewhere warm and dry – like the middle of the Simpson Desert. For the time being however, she lives in Ohio and dreams about being warm…

In an alternate universe JC Cassels is a space pirate. In this reality, she quenches her thirst for swashbuckling adventure by writing space opera. When not writing in her haunted hospital, JC lives with her husband, three children, five dogs, twenty chickens and a horse in a century-old house in a tiny rural community, and enjoys spending her free time sewing, camping, and heckling theoretical physicists on the Science Channel.

H. B. Lyne
Ghosts of Winter (Echoes of the Past series)

H.B. Lyne lives in Yorkshire with her two children and two cats. When not juggling family commitments, she writes dark urban fantasy novels, purging her imagination of its demons. Inspired by the King of Horror himself, Holly aspires to be at least half as prolific and successful and promises to limit herself to only one tome of The Stand-like proportions in her career. Other idols include J.K. Rowling, Joss Whedon and Robert Kirkman, and she will often be spotted wearing Harry Potter, Firefly or The Walking Dead apparel.