When some mistakes come back to haunt you, they steal your heart and soul...


Sixteen years ago, I royally f**ked up.
A tequila soaked night in Vegas went wild and I ended up making a mistake that's now threatening to destroy my future.
What happens in Vegas doesn't always stay in Vegas.
How do I know?
My twenty-one year old stepdaughter is on her way and has the power to end my royal family's thousand-year reign.
I won't allow that to happen.
My first thought was to throw her into the city's dungeons and leave her there to rot. If she's dumb enough to even hint at blackmailing me with whatever she knows about my past, she'll never see the light of day again.
But then I saw her and everything changed.
Sweet, innocent Emma.
The second our fingers brushed, all blood left my brain rushed to my d**k.
I had to kiss her. Had to dominate her. Had to make her mine.
She's dangerous for my sanity and our relationship could cause a diplomatic disaster, but I'm powerless to resist her luscious curves and her eagerness to please.
There's just one problem.
She has no idea who I really am.
She thinks my name is Kit and that I'm just someone who works for the royal family. When she finds out I'm Prince Kristian Tandorf--her stepfather--she'll hate me forever.
But, to make her mine, it's a risk I'm willing to take. Because sometimes mistakes are meant to happen. 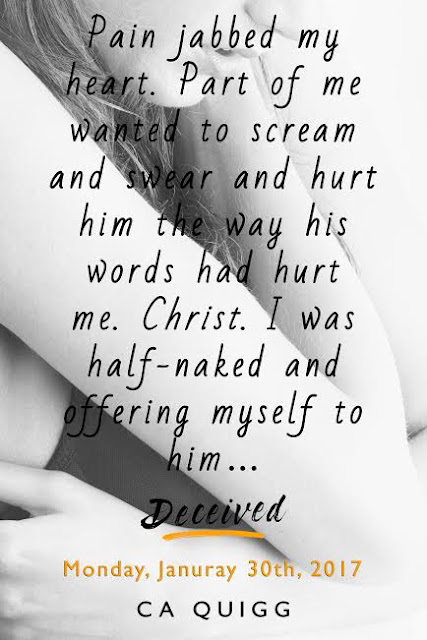 
CA Quigg is Callie Quigg's steamier pen name. Callie first discovered romance stories in her teens and then proceeded to devour every book she could get her hands on. As a result, she spent many
years dreaming about billionaires, movie stars, and aristocrats whisking her away to exotic lands. Sadly, those dreams didn’t come true. But she’s happy to
say her very own handsome hero showed up eighteen years ago and swept her off her feet.


When not writing steamy stories about sassy heroines finding Mr. Right, she can be found watching trashy TV, drinking cheap bottles of wine, and eating
copious amounts of British chocolate.


I used my private tunnels beneath the castle to get to her rooms in the unused part of the palace, and when I reached her door, I knocked.
I heard her move behind the door and the sound of the peephole latch sliding to one side.
"Go away," she said.
"We need to talk."
"You said enough last night. Leave me alone."
The quaver in her voice hung a noose of shame around my neck, and I hammered my fist against the door. "Emma open the bloody door. If you don't, I'll knock it down."
The door flew open. Emma's eyes were dark and ominous. Like a cloud filled sky right before a lightning storm. She looked as if she'd gotten as much sleep as I had.
"What do you want, Kit?"
"Can I come in?"
She stood back and crossed her arms. "It's not like I can stop you, is it?
"But you can, sweetheart. You can stop me anytime you need to. I'm not a monster."
"I didn't say you were, but you seem to think you can take what you want when you want it and then dispose of it, dispose of me, when you've had your fill."
I stepped into the sitting room. The lightly spiced air smelled like her, and I drew in a deep breath. "I'm sorry for my behavior last night. What I said and the way I acted was unforgivable, but, please, allow me to make it up to you."
She closed the door and pressed her back against it. Her entire stance from her crossed arms to the thunder on her face shut me out. "Screw you and your big-ass dick. I don't want anything made up to me. As soon as I talk to Prince Kristian, I'm out of here."
Her fury was intoxicating, and I felt a wave of want. I expected her rage. Accepted it even, and I would do what I could to harness her anger and passion so we could both get enjoyment from it.
I reached out wanting to touch a lock of hair, which lay over her shoulder in shiny black waves, but she jerked away.
"I can't stop thinking about you, sweet Emma. You're there when I close my eyes. You're there when I open them. I don't understand how a woman I met less than a day ago has done this to me. I'm not used to feeling like this and I don't know how to handle it."
Her usual cat-green eyes were dull and weary, and her lips were pressed into a tight line of pissiness.
She dropped her arms to her sides. "What are you talking about? Are you on drugs? Look at you. You could have any woman you wanted. Women probably throw themselves at you all the time. I'm nothing special." She rubbed the heels of her hands over her eyes then clasped her head in her hands. "I don't understand any of this. My brain feels like it's going to explode."
"The only thing you need to understand is that I want you."