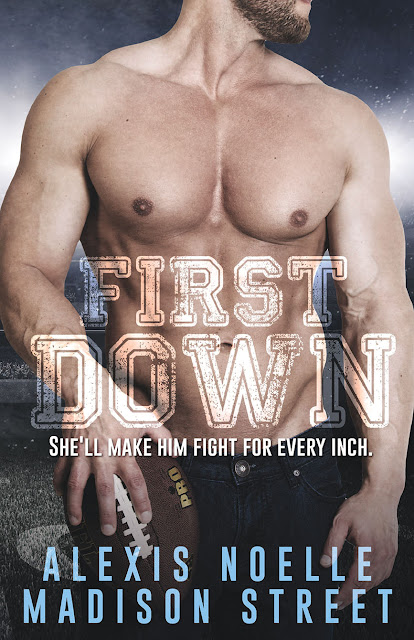 Football is my life.
My passion. The only thing that matters.
There's one goal: A perfect season.
But now, all that’s changed.
The feisty little brunette on the sidelines.
I watch her. I study her.
I want her.
She’s my new goal.
And it won’t be easy.
Not to mention she’s the enemy.
We both know being together will stir up a storm.
That doesn't change my mind.
In fact, knowing there's a challenge only makes me want her more.
No matter how hard she fights, I’m going to make her mine.

****Warning: This book contains strong sexual content and foul language. Intended for ages 18 and over. ** 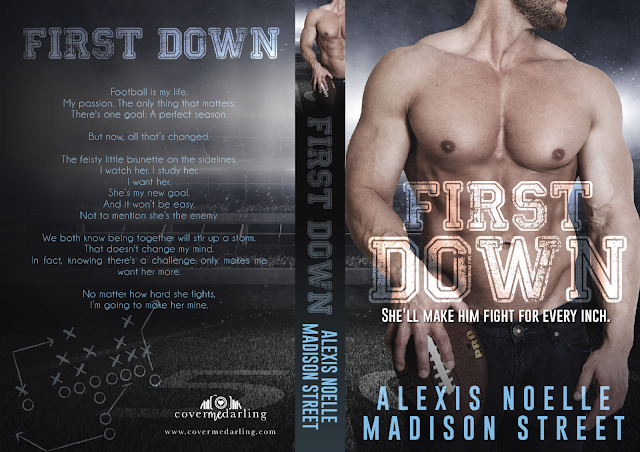 Madison began writing at a young age. She would write episodes of her favorite television shows and her passion has grown since. She decided to pursue her dreams and debuted her dark romance suspense novel, Little Things, in June 2014. It was well received by thousands of readers and became a bestseller in Romance Suspense on Amazon.
Madison Street was born in New York City and was raised in the Bronx, where she resided until she was 17 years old. After 9/11, Madison joined the United States Navy to serve her country.

During the deployments, Madison constantly wrote short stories and she discovered her passion for writing. You will find Madison always on the computer, whether she's on Facebook, designing websites, messing with Photoshop, or writing for her blog.

Alexis Noelle lives in Philadelphia, Pennsylvania with her husband, and three kids. On top a writing career, she is a full-time student and a full-time mom. She loves spending time with her kids, although she has to hide the computer from them when she is writing! She loves being active and being outdoors, especially if it involves any kind of shopping.

She has always been passionate about writing. She loves to read romance books and feels like being able to lose yourself in a book is one of the more exciting aspects. The books she loves to read and write will be ones that make you feel for the characters. Alexis believes that you should have an opinion on every character in a book whether you love them, hate them, or think they are up to something.

She also believes that the most important critic is your reader, so she loves to hear from the readers. She wants her fans to be open & talk to her about what they want for the characters in the story, and what they would like to see happen.

“What do you want Dawson?”
“Ha! So you do know who I am. And here I thought we needed introductions.”
My eyes roll. “Everyone knows who you are. I’m not an idiot.”
His body reaches me and he completely towers over my short frame. I can’t help but feel a little intimidation but I can’t let him see that. I won’t.
“I just want to finish our conversation from before that little interruption. I know you saw me last night. Just admit; you were watching.”
His voice deepens as his eyes turn dark, seeping with tease and lust. I gulp, returning his stare and know that I can’t lie my way out of this mess.
“You’re right, I did see you last night. I was watching. But, it’s nothing I haven’t seen before. You just caught me off guard. I wasn’t expecting to see that and that’s why I was staring.”
His eyes squint, trying to decipher what I just mumbled.
Just as his mouth opens, the valet driver returns with my car, pulling up to the curb. “Your car, Miss Andrews.”
I step away from Dawson and spin to face the driver. I thank him and walk around the car toward the driver side as the valet holds open the door for me.
Just as I’m about to climb inside, Dawson grabs the valet by his jacket and pushes him away and shuts the car door. “Buzz off kid, we’re busy here.”
My mouth drops as Dawson sends the driver inside. “Why would you do that? He’s just doing his job.”
Dawson snickers, “Please. He’s just trying to score points with you. I could have seen that shit from a mile away.”
I shrug, standing against the driver side door. “And what if I wanted him to. That’s none of your business.”
He chuckles deep under his breath then inches his head, closer to mine. “Yeah? And I bet you would have been thinking of me instead.”
His fingers reach up, grazing my skin, igniting it on fire as the heat from our touch scorches between us.
He whispers, “Just admit it Peeps…you want me to --.”
My mind snaps out of the trance and I immediately push him away from me. “No, stay away from me.”
I open the car door and jump inside, immediately shifting the car into gear. Just as I’m about to pull away, he taps the window and I can hear his voice chime through the glass.
He gives me a devilishly handsome and conniving smile. I can’t help but feel excitement and aggravation all at the same time. “You can’t run from me forever. This ain’t over.”