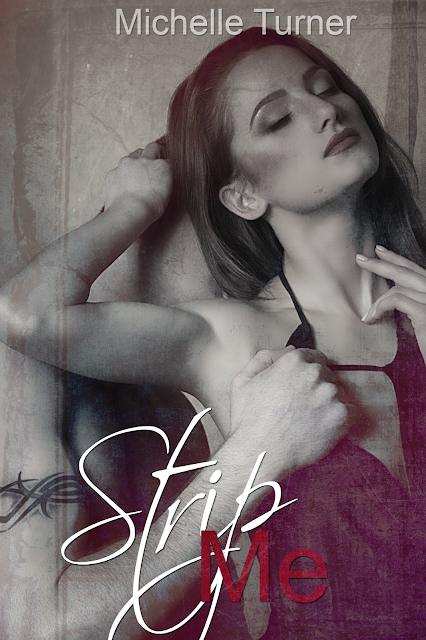 Briar Roberts is controlled by her father. From the way she dresses and acts to what she’ll do with her future. So, on a girl’s trip to Vegas she decides to give herself one night of freedom. Freedom to find the real her, even if she can only be that version temporarily.

Zane Oliver started out a dancer, but through his hard work, he now owns the hottest male strip club in Vegas. His club’s number one rule is “No Messing with the Customers”, and he’s had no problem following it until the night Briar Roberts comes in. But the innocent beauty has him throwing all his rules out the window so he can have her.
What’s Briar going to do when she learns what happens in Vegas doesn’t always stay in Vegas?

Based in Ohio, Michelle, is often found with her spoiled son and equally spoiled dogs. When she's not at her day job she can be found reading, writing, or binge watching Game of Thrones for the billionth time.

“No messing with the customers.” He recites. That’s right. It’s simple; the guys are to be fantasies for the ladies, not realities. It’s when they try to cross the two that drama starts up in my club. And I hate drama.

I pat Davis on the shoulder as I walk by him to the door. “That’s right. And don’t forget it.”

The stage lights are off while I get in place, right at the front of the stage. My back to the crowd, arms crossed at the wrist behind my back, feet a little bit apart, head down. The opening licks of Hendrix’s version of “The Star Spangled Banner” kick in, the lights come up, and I spin around to face the crowd. I do some synchronized army type marches and then the song fades into Foo Fighters “My Hero” and I get down to it. The camouflage jacket gets ripped off revealing my tight t-shirt. The ladies scream, of course. I’m not arrogant. I know I’m built and that this shirt fits me like a glove. That’s why they come here to see what they don’t normally see at home. It’s all a part of the fantasy. I start out at the right of the stage doing my dance, which is very intricate moves mixed with a lot of gyrating and hip thrusts. I barely work the pole; it’s never really been my thing. The t-shirt gets slowly peeled off, revealing my toned chest when I make it to the opposite side of the stage. This earns another round of squeals from the audience. I get down on my knees and grind on the floor. Bills are all over the stage and me, and I haven’t even got the pants off yet.

I do a move that slides me across the stage till I’m right at the very front middle. Right where Davis said the hotties are sitting. I find them, a group of five. He wasn’t lying; they’re nice on the eyes. Too bad I made rule number one. My eyes lock on the girl closest to the stage. A brunette with hair that’s been styled to look like she’s just been fucked; it’s wild and sexy. My moves take me back to my feet and just in time to rip off the pants and reveal my white thong. The whole time, the crowd is going nuts and shoving bills at me left and right. My eyes stay locked on the brunette. Her pale green eyes look me over while her top teeth nibble on her bottom lip. When her eyes reach my groin area, her cheeks flush and she quickly turns away. It’s cute and, in my line of work, refreshing. I decide I need to push her boundaries. There’s only a little bit of time left of my performance so I hold out my hand for her. She hesitantly takes it, letting me bring her up on the stage. Her eyes are the size of saucers and her soft hand in mine is shaking ever so slightly. I position her with her chest against the pole. Her hands are above her head, wrapped around the metal, hips and ass pointed out towards me.

I lean in and whisper directions in her ear. “I’m going to touch you. If you don’t like it, stop me by bringing your hands back down. Otherwise, keep them right there. Don’t move them unless I give you permission. Understand?”

I’m hoping she answers with words because I want to find out if her voice is as sweet as I’m imagining. But instead, she swallows hard and nods her head. So innocent. This is going to be fun.

I run my hands down her sides and feel her shiver. She doesn’t bring her hands down so I take that as a sign to continue. One hand goes to her hip, the other goes to her stomach to bring her back against me. I grind against her ass, holding her tight. Her head falls back against my shoulder, but her hands stay rooted to the pole. I use my hands to guide her hips in grinding against me. I can see that she’s biting her lip again and it just spurs me on. I slide the hand on her belly down, skimming over her sweet spot ever so briefly, to her bare thigh. She moans just loud enough for me to hear.

I spin her around, bringing her legs up to wrap around my waist. Her hands come free in the position change. But as soon as she’s wrapped around me, she puts them back in place. Her back is arched in this position, causing her perky little breast to be in sucking distance. I force myself to refrain, though I really want to take a taste. I’m already crossing lines we’re not supposed to with customers, but there’s something about this girl that makes me not care. I look down where our hips are meeting and I see her short dress has slid up to show me a pair of hot pink lace, boy short panties. Fuck me! Literally, please!

As the song winds down and the grinding picks up, her hands leave the pole to grip my shoulders. I can hear her labored breath in my ear. And if I didn’t know better, I’d say I have her close to coming. At the exact moment the song ends, her forehead hits my shoulder; she lets out a gasping moan and her entire body quivers. Fuck, that is hot!

I continue to hold her up long after the song has ended. Finally, when the shivering stops, I whisper in her ear. “Will you be okay if I put you on your feet?”

She pulls back and those pale green eyes of hers lock with mine. She nods her head and for the first time I get to hear her voice. “I think so.” It’s a soft, delicate voice. It reminds me of a princess, which fits her perfectly. I slide her down my body, making sure we’re touching the entire time. It earns me another full body shiver that causes me to grin.

“I’m Zane, by the way.” I introduce myself, still holding her at the hips because I can’t seem to let this girl go.

She pushes a strand of hair out of her face. “I’m Briar.” Perfect princess name if you ask me. It’s around this time I realize two things. One, I’m going to break rule number one for Briar. And two, I need to take a cold shower, right now, before I make a big fool of myself by coming in my thong in front of the entire crowd. That’s more than any of them are paying for.

“Well, Briar, I have to get backstage.” She looks down and nods. I put my hand along her jaw, forcing her eyes back to mine. “Promise me you’ll stick around until I can come back out.”

She watches me intently and I’m actually afraid she’ll say no, but she finally says. “I’ll be here.”

My hand at her hip gives her a little squeeze before releasing her. “Thanks, Princess.” Her eyes flare at the use of Princess, but I brush it off. We’ve already been on the stage long past my music ending, giving these people a show. I walk her back to her seat and then make my way to the stage door.

Davis and Christian are both standing in back waiting on me, twin smirks on their faces. Davis speaks up first. “So, what happened to rule number one?”