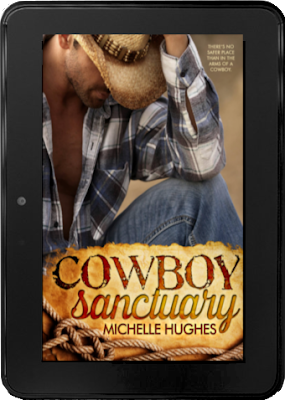 Dana Waterfield’s well-organized life gets tipped upside down when the brutal murder of her twin sister Danielle threatens to unravel everything she’s worked so hard to achieve. Having found herself the sole guardian of her sister’s newborn lovechild, Jeremy, and at the receiving end of her ex-brother-in-law’s unchecked rage, Dana flees to the safety of Dixon Ranch and the strong, muscled arms of Brock Dixon.

In order to protect the baby from the wrath of Danielle’s husband and murderer, Dana must blend into the daily routine of ranch life, and rethink who she really is. When the wrath of a madman threatens the life of her nephew and everything she holds dear, will Dana put her trust in Brock or let the winds of change tear her family apart?

Falling for her sister’s lover was never part of the plan, but there’s something about a cowboy that no woman can resist. After all, the safest place to be is in a cowboy’s arms…

I grew up thinking I'd become the next great country singer of our time.  I began singing at three years old, after being bribed by our insurance man to belt out a song, and that was it.  My life was set in stone.  I pursued that dream for many years, and also wrote songs. I had the pleasure of singing on the Midnight Jamboree in Nashville, and touring the US performing at state fairs, nightclubs, and a myriad of other events.  My first son went on the road with me, my mom and manager and it was an exciting, but sometimes crazy life.  When I got pregnant with my twins, I knew my days of touring were coming to an end.

Writing books didn't even occur to me until I was laid off many years later from a job in respiratory. For six months I stayed home raising my,  by that time,  fifth child (yes I wanted a huge family and had one), I was going stir crazy.  I loved hanging out with my little man, but for someone who worked hard their entire life, there were too many hours in the day.  One day I sat down at my computer and started writing a book just to curb my boredom.  Eight years later I have over twenty books in my library and still can't believe how writing became a career!

I'd always been an avid reader.  The kind of kid that would look up words in the dictionary for fun, yes a true nerd.  My granny Louise was responsible for that.  She grew up on a cotton farm and didn't get a chance to finish her education, so I helped her with what I was learning in school. Granny never put down a book, except to cook, after that and she got me hooked on  Harlequin romance novels that came four at a time each month.

When I started writing that's what I wanted to do, write those happily ever after love stories with the virgin and strong alpha male character.  I loved reading historical romances, but quickly realized that type of writing wasn't for me, so I modified my books to be modern day bodice rippers (which I know is an oxymoron).  That's me, in a nutshell!