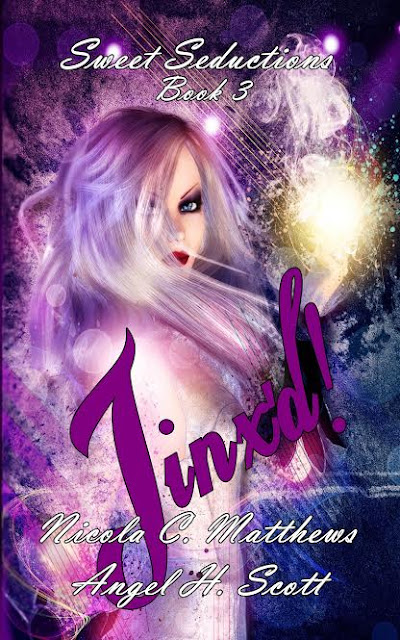 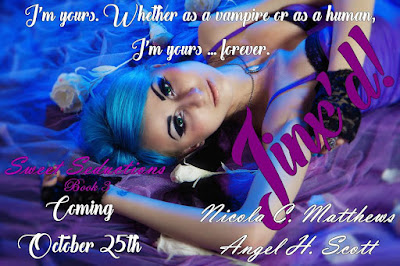 Alicia’s career was going nowhere. In a world where younger was always better, a woman nearing thirty was practically useless, especially in the entertainment industry. She had long since given up her dreams of becoming a model, having spent the best years of her life as the assistant to The Great Georgio, a magical act which relied more on the comic relief of her ability to always manage to sabotage a show rather than based on Georgio’s actual magical talents. When she accidentally cracks open the skull of Jeremy Fergers, the guitarist for the world-renowned vampire metal band White Coffin, Georgio sees a unique opportunity to resurrect their doomed careers.

Georgio is convinced their only hope of making a name for themselves relies on her becoming a member of the undead. He plans to have Alice seduce him, hoping he will embrace her, but when Alicia begins to fall in love with their mark, she refuses to go through with their original plan, forcing Georgio to improvise as he continues his quest for ultimate fame as the world’s greatest magician.

Finding himself in a dangerous situation, Jeremy must make a painful decision – can he live with himself if he embraces Alicia, or can he learn to live without the woman whose impossible klutziness has somehow managed to steal his heart? 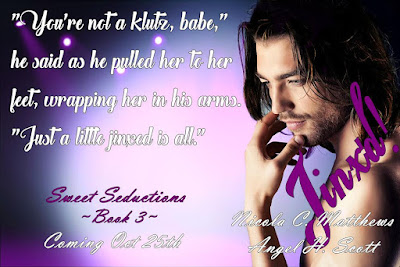 “Jeremy, you are driving me crazy!” she said hoarsely as she wiggled down his body, trying desperately to impale herself on his hardened cock.
He laughed, holding onto her tightly, not allowing her to do the one thing which had her body on fire, begging for release. Instead, he scooped her up into his arms, carrying her back to the beach. He laid her down gently onto the plaid blanket where he quickly went back to enjoying her round, firm tits.
His eyes caught hers as he began kissing his way down her stomach, her legs separating on their own as he tongue lapped at the delicate nubbin throbbing with desire. She squealed as his probing appendage found its way into her dripping center, feasting on the sweet nectar as if he were a starving honey bee.
“Stop … teasing,” she gasped, feeling her muscles already beginning to tighten as the warmth inside her body spread out from the center, running through her legs at warp speed. If he kept this up for much longer, she would be screaming through an orgasm in two seconds flat. What she wanted more than anything was to be riding his cock when that happened.
Jeremy moved over her body, his eyes drinking in the sight of her beautiful, naked form laid out before him like a wanton offering to the gods. Her hips were round, her waist small, and her tits two large mounds of perky flesh which made him weak in the knees. The woman was absolutely beautiful, and she had a sexual appetite which nearly matched his own.
Alicia gasped as she felt the head of Jeremy’s cock at her entrance. She didn’t want easy, romantic. She was hornier than she could ever remember being in her life. She was through with romance for the night; right now this was more about sex and getting what she wanted, what she needed from him.
As if sensing her desires, Jeremy wasted no time in shoving himself fully, completely inside of her drenched pussy, ripping a scream from her lips, not giving her time to adjust to his abundant size. He immediately started up a fast rhythm, riding her hard, just the way she imagined it would be. He bent his head and wrapped his mouth around the side of her neck, his fangs nicking the delicate skin as he fucked her hard and fast. He could feel her juices squirting out of her with each thrust of his cock, her body soon contracting around the giant member as he shoved himself as deep into her body as he could, over and over again.
She knew she was going to come, and soon, but before that happened she wanted to taste him, to cram that delicious cock of his into as many holes as possible before the night was over. If she never saw him again, she at least wanted to be able to say she had properly fucked a rock star.
As Jeremy pulled back, she brought her leg up, causing him to slip completely out of her soaking pussy.
“What the fuck?” he asked as he licked her fang tracks so they would heal, wondering if maybe he had fucked her a bit too hard.
“That cock looks amazing, Jeremy. Give it to me,” she practically hissed.
“I’m pretty sure that’s what I’ve been doing for the past five minutes,” he said, trying to shove himself back into her honey pot.
“No, darling, I want it in my mouth,” she said in a hushed whisper, her hand moving to cup his heavy balls.
He groaned, causing her to laugh as she kept her knee wedged between them, stopping him from entering her again. “You heard me,” she said as she gave him a sly grin. “The Great Georgio isn’t the only one who can make things disappear.”
Unable to even form a coherent thought after such a bold statement, Jeremy allowed the beautiful woman to roll him over onto his back, watching with half-closed eyes as she ran her tongue over the sculpted muscles of his stomach.
It felt like an eternity before she finally reached his twitching cock, her small hands wrapping around it before she popped the head into the moist cavern. He moaned loudly as her mouth slid down the length of him until he could feel the tip hitting the back of her throat. He thought for sure she would be forced to stop, but she didn’t, even as he felt himself push past her tonsils, she kept right on going. His eyes grew wide as she slowly worked all but the last inch or so of him into her mouth and throat, her tongue moving in slow circles as she slid him in and out of her hot, wet cavity. Nicola Matthews was born in Biloxi, MS in 1975. Raised in southern Mississippi, she still resides in her small hometown with her husband of twenty years, their three children, and their pet Yorkie, Lily-Claire. Her love affair with reading first began at the age of seven with her trying her hand at penning her own imaginative stories at the age of eight. As the years passed, her passion for writing and reading intensified with her penning her first novel at the age of thirteen followed by trying to break out into the publishing world at the age of fifteen. In 2011 she launched her own publishing house and has published nine total novels to date.


Nicola C. Matthews:
On the web

Nicola on the Web:
www.NicolaCMatthews.com