Elias never saw it coming. The deception had been flawless. He had looked into the dark eyes of his half-brother Qaylin. The torrent of anger and rage rose from the dark abyss of his soul at what this bastard had done. It was unlike anything he had ever felt before or since… A million times a million Cains screamed across the Heavens. Their voices echoed in his head demanding the blood of the betrayer, Qaylin!

Elias knew it was time he stopped fighting from a position of weakness. He had to get up and take the fight to the enemy’s doorstep and he only had a small window of time to do so. He would have to strike while they thought he was beaten, then stand toe to toe against the forces of Hell itself. Somehow he had to even the odds and give him and his men a fighting chance to win. But his ancient enemies were powerful. It appeared as though the heavens had been eerily quiet as if the matters of men no longer mattered to the angelic host. It seemed Lucifer had full dominion over this mortal coil.
If that was so, what chance did Elias and his men have against such an enemy?

“The Rage of Angels” is the explosive second book in the CAIN series. 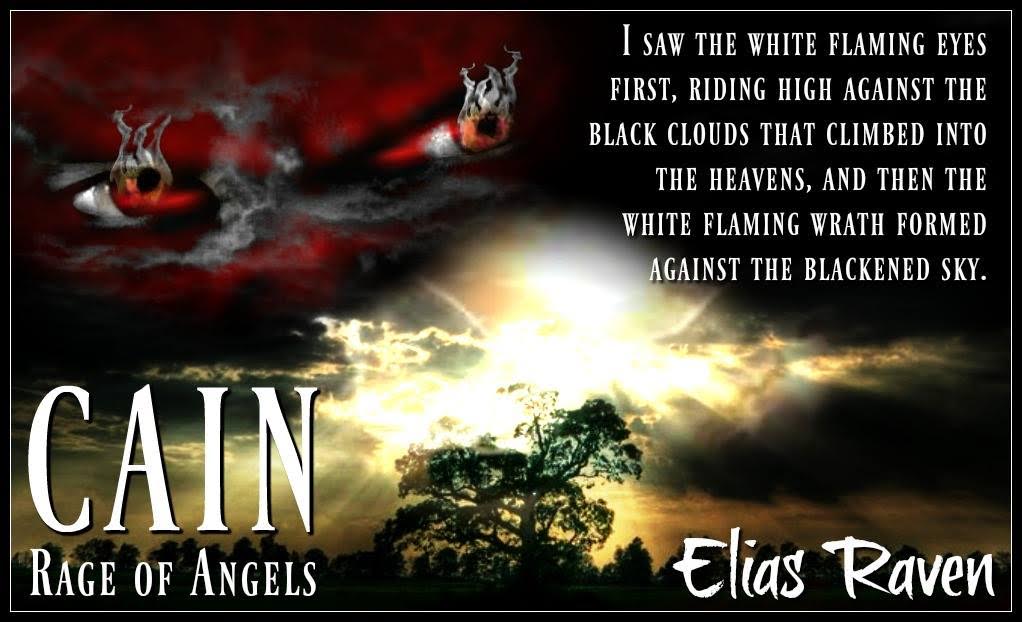 Elias~ I didn't get it, it was like my brain at that moment had stopped functioning.
Like it was made of glass and had shattered into a million tiny fragments
of images and emotion painted across the television screen as I watched
the flames burn. My empire was on fire! G and Parker were dead! My mother
was bitter and my brother had just sliced me open from head to toe with
a katana of raw emotion playing me like Nero while Rome burned.

I screamed so loudly everyone in the house came running, beating on the
doors to the den. The tears exploded out of me like a fountain! I dropped
to my knees in front of my father, in front of the screen unable to comprehend
the ass kicking I was taking from this man.

My dad waited looking down at his hands, unable to even comprehend
but at the same time feeling everything. He was part of me after all.

My cell phone chimed as my mother and Khyentse calling over and over again
I slammed my fists into the floor until my hands started to bleed, but I didn't care.
I wasn't feeling it, I was pain, I was anger, I was the flame, my emotions, my feelings everything was a white-hot poker of anger.

I felt like a cyclone of rage as I stood up. I have never ever wanted to kill before,
but at that moment me.. us... were all in unison. Qaylin was a dead man. I was going
to personally kill him and I was going to look him right in the eye when I did it
so he knew who did it, just like when he killed my father.. Like when he killed me.

Other Books in Series

The Cain family has many secrets. The only son Elias, an alpha male and former rock star, has the “look” with a set of eyes and smile that will drop a girl’s panties at 10 yards. He is the heir apparent to the wealthiest family in the world and it’s now time for the transition of power. But some things never go as planned - especially for this family.

When Elias' one true love Genevieve returns to his life, they start on a journey to unravel the twisted knot that has been laid before them. They enter the serpentine labyrinth of deceit and despair. Two worlds will collide and meet in the middle. Two men will vie for the love of one woman and to the victor will go her soul. There is no second place, and the very gates of heaven and hell will shake as these two gear up for the ultimate confrontation.

The distant past and the modern world will collide on a rocket ride of twisting emotions and imagery. Every story has a beginning, buckle up for this one.

Elias Raven was born and raised in Los Angeles. He’s an avid reader with a lifelong passion for writing. He’s a storyteller, a poet and a talented musician with an amazing voice. Oh, and let’s not forget an amazing cook!

As a young boy he spent many summers reading classics such as "The Adventures of Sherlock Homes" and "The White Company" by Sir Arthur Conan Doyle. His creativity was constantly being pushed as he learned more and more about the world around him. His taste in literature spanned from classics to science fiction/fantasy. He expanded his taste devouring everything from William Blake to Milton, Dante, Baudelaire, Arthur Rimbaud, T.S. Elliot, Emily Dickinson, Robert Frost, Khalil Gibran, William Carlos Williams, Ezra Pound, Paul Verlaine, Walt Whitman, Alan Ginsburg, Jack Kerouac, William Burroughs, Carl Sandburg, Dylan Thomas, and Jim Morrison. These inspirations and his sheer love for reading had him take pen to paper around the age of 20.

Did I mention he’s a Musician? ...You can often find him playing his guitars (both electric and acoustic) and keyboards and singing (4 octave ranges) in his home studio. He’s a classically trained music aficionado -trained early on by Beethoven, Brahms, Mozart, Hayden, Liszt, as well as Big Band, Jazz and Rag Time. Spending time with his father at the Los Angeles Philharmonic; experiencing his first orchestra concert at the age of 9.

Elias the Gourmet Cook…Oh My!...His Japanese mother and grandmother trained him very well in fine culinary skills both in cooking and food appreciation from all over the world such as Italian, Indian, Moroccan, Thai, Japanese, Chinese, Korean, Hawaiian, Pilipino, Greek, and Polish.
When Elias is not reading, writing, composing music or cooking…he can be found listening to music, playing games, hanging out with his kids. He enjoys going to concerts, going on culinary adventures, sightseeing, spending the day at the beach or in the mountains…just doing something adventurous!