When young archaeology student, Mitchell, discovers some unusual items, while digging up a paddock, he believes it could be a major find.
Following his instinct Mitchell risks his job and refuses to dig any further until Professor
Phinneus Groves, the most respected archaeologist from the university gives him the all clear.
Will the find be significant?
What tale do they have to tell?
YOU now sit at the crossroads, YOU are in control, YOU have five unique tales to follow.
Which way will you go? 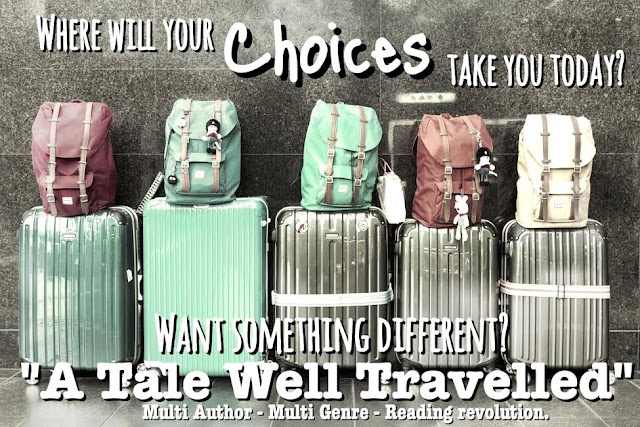 Two more hours and I can get off the damn front loader and go for a beer. Digging dirt for a new housing development is as boring as hell and, after ten straight days
I’ve had a gut full. One more year and I’ll have my Archaeology degree and yep, I’ll still be digging the stuff but it will be a hell of a lot more interesting. Instead of moving dirt from one place to another to add to the never ending concrete jungle, I’ll be moving it to uncover the past.
A flash of white in the long grass catches my eye and I shut off the machine. You can never be too careful on neglected sites where the undergrowth can be as high as three or more feet. It could be an animal, a child hiding from its parents or nothing more than a pile of stones. Whatever it is needs to be checked out. I could never forgive myself if I injured someone.
I jump down from the loader and stride through the grass which waves around me in the wind. I stand six feet four inches tall and the grass reaches my hips. Glimpsing the flash of white again, I warily approach. Pushing the vegetation aside, I find what appears to be a rock formation but it’s not natural. It’s shaped like a small pillar, around a foot high and two inches in diameter. My gut tells me it has been placed here for some specific purpose.
My curiosity is peaked and I crouch down to get a closer look. The rock of the pillar is smooth, weathered white, almost like marble. As the grass is blown by the wind, other pillars are revealed. I stand and examine each one. They are all identical, around the same height and arranged in a semi-circle. I’m intrigued. This is something my professor at University would be interested in having a look at. Pulling my phone from my back pocket, I punch the button for his direct number and wait for his answer.

Western Romance has always been my first love but I also write hot contemporary romance under my pen name A.L. Simpson.
In my Westerns I love to write about knock ‘em down - drag ‘em out fights, outlaws, bank robbery, stage hold-ups and romance.
In my Contemporary’s I write f/m, m/m and m/m/f. I usually draw on experiences for these and they usually cause more than a few tears for the readers.
When I am not writing I enjoy walking our dogs – 2 elderly Jack Russell Terriers -  with my husband and travelling both overseas and in Australia.
Website | Goodreads | Amazon | Facebook

Margaret Tanner is an award winning, Australian author, who writes Historical Romance and Western Romance. She loves delving into the pages of history as she carries out research for her historical romance novels, and prides herself on being historically correct. No book is too old or tattered for her to trawl through, no museum too dusty. Many of her novels have been inspired by true events, with one being written around the hardships and triumphs of her pioneering ancestors in frontier Australia.
She has found from writing Western Historicals, that frontier Australia and frontier America, had many similarities, isolated communities, a large single male population and a lack of marriageable women.
Margaret is married and has three grown up sons, and two gorgeous little granddaughters. Outside of her family and friends, writing is her passion.
Website | Goodreads | Amazon

Cherry Shephard writes dark stories of sexy alpha men and strong females.
After discovering her love of written romance at the tender age of 13, she’s not afraid to uncover the ugly pasts of her characters, to create beautiful futures that leave you breathless and wishing the story would never end.
Cherry lives in sunny Queensland, Australia, with Mr S, her children, and a zoo of animals.
When not writing, she can be found indulging in her other passion, watching horror movies.
Cherry loves to hear from her readers, and considers them her closest friends.

Kathleen Kelly was born in Penrith, NSW, Australia. When she was four her family moved to Brisbane, QLD, Australia. Although born in NSW she considers herself a QUEENSLANDER!!
She married her childhood sweetheart and they live in Brisbane with their two furry kids. A British Short Hair called Grace and a Burmese called Jack.
Kathleen enjoys writing contemporary, romance novels with a little bit of erotica. She draws her inspiration from family, friends and the people around her. She can often be found in cafes writing and observing the locals.
If you have any questions about her novels or would like to ask Kathleen a question she can be contacted via e-mail: kathleenkellyauthor@gmail.com or she can be found on Facebook. She loves to be contacted by those that love her books.
Website | Facebook | Twitter | Amazon | Goodreads
Newsletter | Instagram

Hello, i am BATMAN..... -laughing-... I just always wanted to say that.
I am happily married to an amazing Canadian man and a mother of four delightful children. i fell in love with books as a young girl, reading Judy Blume and Enid Blyton. i progressed onto loving the supernatural genre as a teenager and never left.

I live up in the Sunshine Coast in Queensland, Australia, where the weather is always warm and sunny.
It has always been a dream to write a book, but i have never had the self belief that i could. until i celebrated my 40th birthday. it hit me, "now or never" so I pulled on my big girl panties, picked up a pen and paper and didn't look back.
"The Halfway House Series" is my debut series.
Where family isn't always blood related, and the impossible love is possible if you believe.
Now I want to take you under the water, into the magical world of water dragons.
I hope you can swim, because these men like it wet.
The Apalala Clan series is about to take it's first adventure with book one "Immersion".