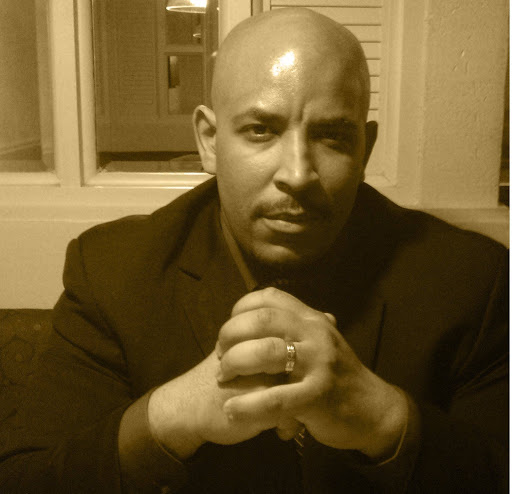 He lives in Nevada with his long-time girlfriend, is an avid listener of electronica, and enjoys writing and publishing articles. He jokes: “I’m always looking for writing material.” 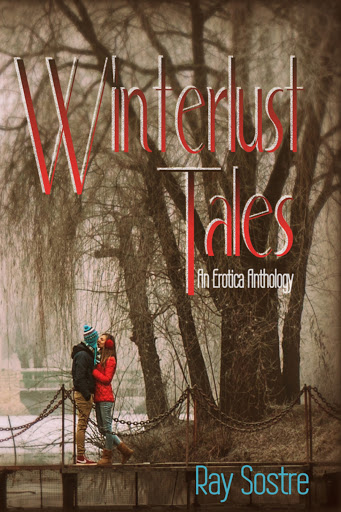 Prepare for a cold winter, but because the season has changed it doesn’t mean the sexual fantasies have to. Author Ray Sostre delivers six steamy reads, related to a winter theme.


Whether you’re snowed in or vacationing, or celebrating a holiday with your passionate one, this book will guarantee to heat up your winter. 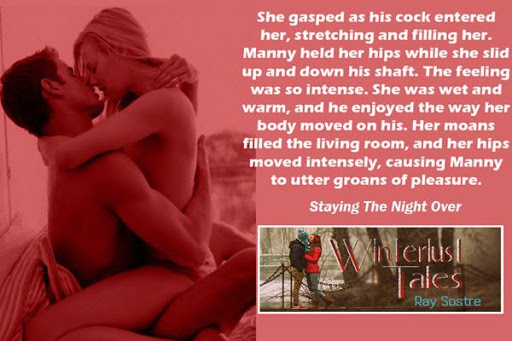 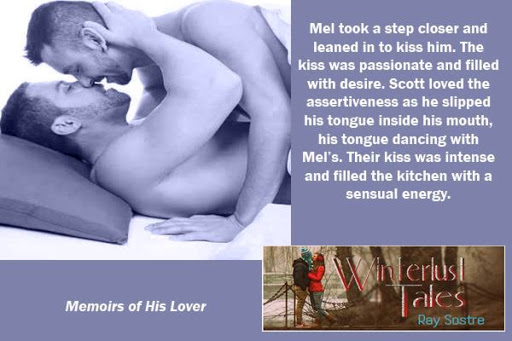 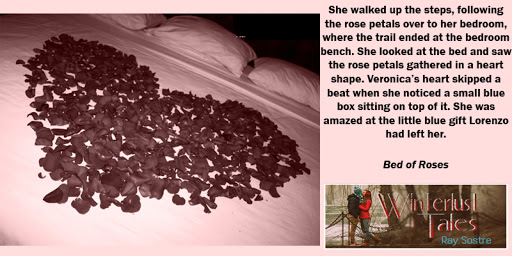 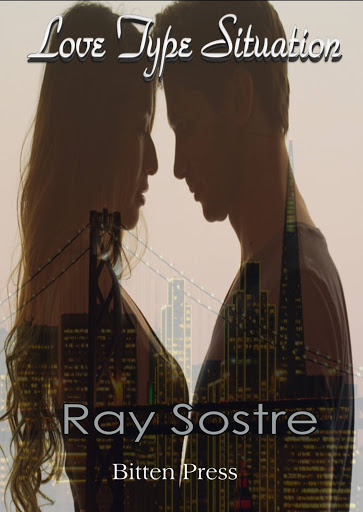 Sadie Mendez is a single woman from the Bay Area who’s had a lot of bad luck with men.

The men she was attracted to didn’t either want her or appreciate her, until she
met someone she once befriended years ago – Andrew Bishop, who is younger
than her and established. Sadie soon realizes that age doesn’t matter when she
realizes how special Andrew treats her, but Sadie has another problem she’s
trying to get rid of – Dustin Ellerton – the man she had been seeing for several months, who wouldn’t let her go. 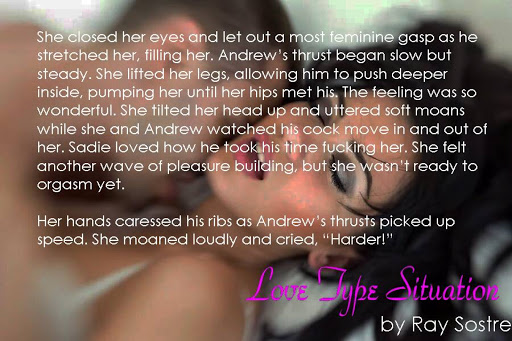 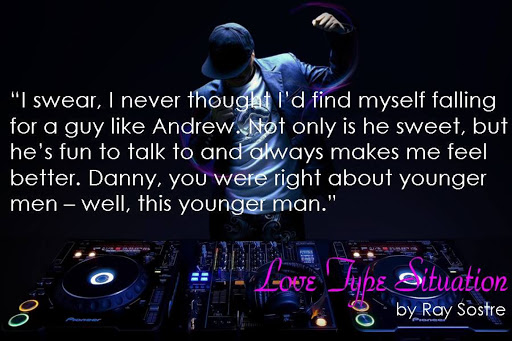 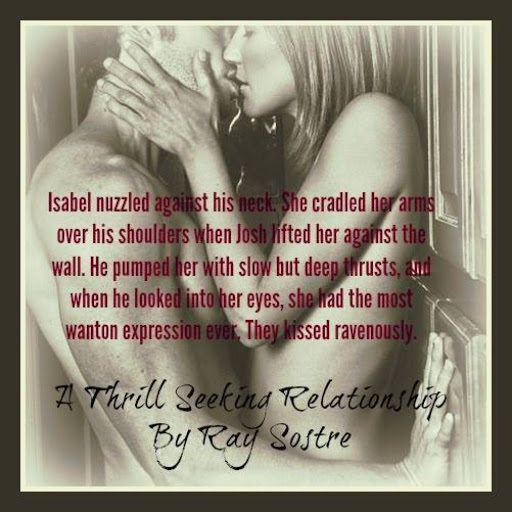 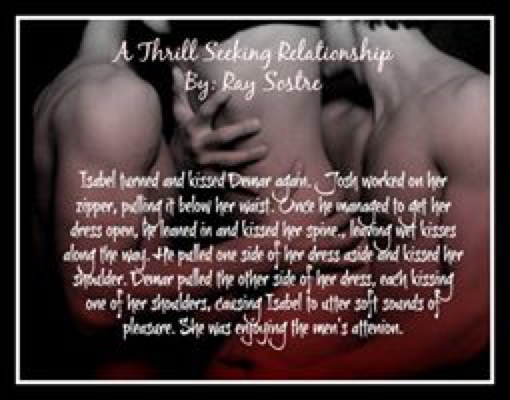 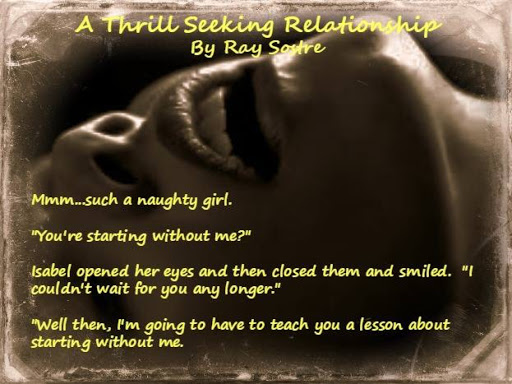 1. When and why did you begin writing?

I originally started writing when I was in high school, in 1990. My very first story was about a high school crush, but in 1997, I gave up writing to pursue a passion that I had love for – music. I worked the nightlife as a club DJ, spinning house and hip hop music in the 90s and 2000s. When I let go of the nightclub scene in 2004, I moved out to Nevada and started my life anew. At that time, I’ve lived in Nevada for 5 years, but I felt I was missing something in
my life, and I knew I wasn’t like some of the other people who found working in the casino as their career. It was then when I decided to get into writing, but writing erotica happened by accident when I came across a story written by a man I thought could be better.

2. When did you first consider yourself a writer?

In 2010, I picked up writing, but I didn’t actually call myself a writer until a year later, in 2011. That year, I was involved in writing groups, where I frequently participated in writing events, and later that year I published my first ebook. When I realized what I was doing, I kept pursuing it more and more.

3. Do you plot out your books on paper? Or seat of your pants?

I would have to say at the seat my pants, because if I put it on paper these days I would stumble on what I need to write. If I write on paper, it’s to create an outline, such as chapter titles or names of characters, but I have to type it out. I’m a faster typist than a writer.

4. Are experiences based on someone you know, or events in your own life?

None stories are ever based on my own personal experiences. However, I would include a few things I’m related to, like the nightlife, for example. I’ll never use my own name in any of my stories. I like keeping it fictional and focus on being that way. When I write the story, I just want to tell the story to the reader and give the characters a purpose.

5. What books have most influenced your life?

Wow, there were a number of them, dating back to 2011. Off the top of my head, at the moment, I can say a number of books written by Dawn Prochilo to an author I was intrigued by Sarah Michelle Lynch and Symone Craven, to now Jade West, even books by Suzanna C. Ryan, Gemma Parks and Pablo Michaels. These books are easy to read, as far as reading the plot. None of their books had ever bored me, and they keep the story going. I could easily get lost into them from the beginning, and whenever I see a new release by them I’m ready to buy.

6. If you had to choose, which writer would you consider a mentor?

My biggest mentor is Dawne Prochilo. I don’t know where she is today. I hope things are well, but she’s my biggest mentor, because of the style I adapted in my stories. Unlike some authors who put too much fluff and fillers in their stories, Dawne wasn’t anything like that. She was straight to the point, told her stories, and made her characters very interesting. I’m privileged to have worked with her and appreciate the writing advice she gave.

7. What book are you reading now?

8. What are your current projects?

While I’m awaiting for the edits of Allison in Wonderland to arrive, which is at least one week away, I’m working on a large novel that will be indie published, called The Chronicles of Meriesa Lopez. I’ve been working on this project since 2012, but I got back to it in 2015, where I revised much of the story throughout 2016. I’m nearly done, and looking to write a sequel.  I’m also shooting for the completion of Love Out Of Lust Series. I had a lot on my plate this year with one project, and I want to not overload so much of my work. I have a number of unfinished manuscripts, and I can’t wait to really tackle them.

9. Do you see writing as a career?

Yes I do. Where I live is somewhat depressing. I live in a town where people do nothing more but drink and gamble, and since I’m not much of a gambler I look to writing as my savior. Now, I can write just about anything, but I love writing erotica more – erotic romance. What I love most about writing that genre isn’t only the sex, but the way I can escape from everything else that goes on in my world. It’s something I’m always looking forward to, and when I write I will put in all my time and effort.

10. Is there anything you find particularly challenging in writing?

There’s always something challenging when I write. One of my flaws on what I write is I tend to overthink the story. I feel it may need better structure. I do not aim for realism; it’s not my thing. However, I want the story to sound believable. I write erotica, so I want to keep it as fiction as possible, and very tantalizing. Writing erotica is easy, but filling in the drama can be challenging too, but I will eventually get a good story done.

11. Who is your favorite author and what is it that really strikes you about their work?

I have a number of favorite authors, not one. I love reading books by Jade West. There is something about the author that is able to pull me through. She writes great drama and great sex scenes. I love an author that gets very descriptive in their sex scenes. Then there are books by Gemma Parkes. She has a unique, mysterious way to make you arouse and interested. (Love to know when she’ll be releasing a new book.), and then there are books written by Pablo Michaels. Although, he writes m/m, but so do I these days. He keeps the reader interested in his stories. While his style is mainly romance and adventure, he adds
some naughtiness in them.

12. Do you have any advice for other writers?

Don’t think you can’t do anything. Your mind is the most powerful weapon; all it takes is you putting your mind into what you want to do. Never be afraid to go out there. Things will be intimidating at first, and it will look hard, but nothing’s ever easy. Once you figure things out, you’ll want to be ready for another challenge. Better yet, challenge yourself to something new; take on something that gives writing a passion. There are going to be a handful of critics who will look for all sorts of flaws, but most importantly, be happy with yourself. Also, learn to differentiate the good critics from the bad The good ones will give
you advice on bettering yourself; the bad ones will berate your work without any regard of the work you put in. In over time, you’ll gain the confidence in yourself and you’ll know what a good author you are.

13. Which of your books do you like the most?

Love Out Of Lust was one of my notable works, but my favorite work so far was A Thrill Seeking Relationship. The story I wrote was something different and something I’ve long wanted to write in a long time: ménage and sexual adventurism.

14. Do you get nervous when you publish a book?

I do. My main worry is the like ability of the story. I’m confident on how the story is edited  and learned about having a good cover is important, but that would be the only concern about publishing my book.

What do you do to relax?

Cats. Dogs are a pain in the asses for me.

Wow. I have a number of them. I mostly listen to electronica, but I love listening to hip hop, R&B, trip hop, drum and bass, freestyle music, to disco, reggae and dubstep. Once in a blue moon, I’ll listen to blues, but that’s rare you’ll ever catch me listening to Stevie Ray Vaughn.

What questions would you like to ask your readers?

What was your favorite book written by me?
Posted by Unknown at 3:05:00 PM