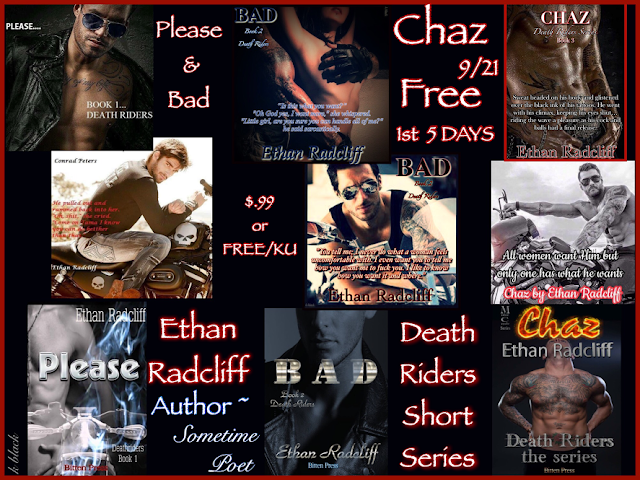 These are a series of short stories with the first 2 books already available.  The 3rd is releasing on September 21st.

PLEASE
Book 1 of Death Riders
Conrad Peters was an outcast and handsome in a rugged sort of way. He’d given up on society yet women wanted him at every turn. Motorcycle bound, he lived from place to place and dollar to dollar, taking love where he could find.
Beauty is often used and abused. He’d find that out after meeting the woman he’d love. Saving himself was a daily chore, but could he save her as well?
BAD
Book 2 of Death Riders
Danny’s a hard man; large and brawny with desires most would shy away from. Not Xavier. She embraces his needs. Danny had all but given up on women. He sought professionals whenever he could. Xavier’s acceptance of him surprised him. He never expected her to relish a BDSM lifestyle.
As they travel together toward California, they’re dodging a tail that’s been put on them by Xavier’s sister’s husband. They’ve already helped her sister and Conrad, Danny’s best friend, leave Georgia, and they are now heading toward Canada.
On his friend's recommendation, Danny plans to join the California chapter of the motor cycle club, Death Riders... a club that prides itself on staying below the radar and the police. But will Danny’s decision destroy his newly formed bond with Xavier? Or will they both find what they are looking for.
The series continues.
Chaz
Book 3 of Death Riders
Chaz Barros is committed to helping Conrad Peters, a brother biker, who is on the run from the mob.
Motorcycles.
Hard, hot women who never say no.
Hard men who never take no for an answer.
All of the above make up most motorcycle clubs.
Chaz Barros is no exception. He’d served his time, committed his. crimes, and is president of the San Bernardino California chapter of the motorcycle club Death Riders. Meet Torri MacClare, the woman in his life. Like most biker chicks, she’s untamed and tough. 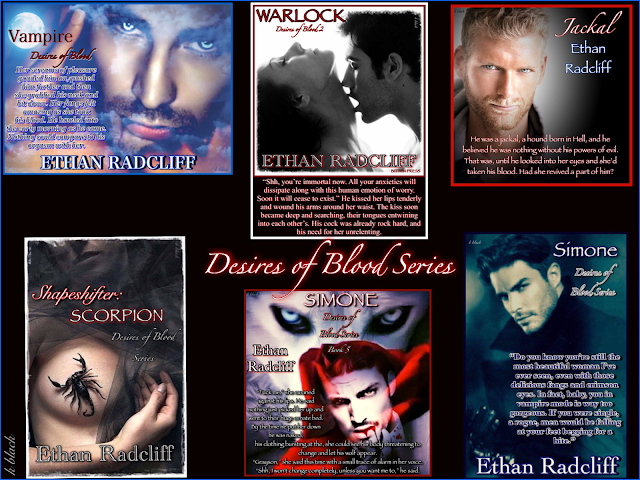 
VAMPIRE, DESIRES OF BLOOD 1
Royce Bellamy is over one thousand years old. He’s a vampire. He’s also part of an elite force with the New York City Police Department and he’s faced with a dilemma. His current lover is pushing him to turn her, she’s one of the cities’ top ADA’s.
Royce already has three vampire beauties running around the world, who owe their immortality to him, did he need another?
His current human lover, Beth Ann has taken hold of him in a way he never expected. Vampires weren’t supposed to fall in love. But was it love? He’d find out soon enough.
Meet Lucinda, Magenta and Dahlia his three children. Royce has released them; it is after all the twenty-first century. One will fall in love with a warlock, one a jackal and one with a shape-shifter. Will any of them find redemption? Or will their desire always be of blood?
WARLOCK, DESIRES OF BLOOD 2
Jared Anderson is down on his luck once again. He has survived much in his long life, disease, gang wars, and famine, and now he is up against an even bigger predator, the black market and the Mafia.
He had a passion for expensive toys and women until he met his match: Lucinda, an incredibly beautiful and rich woman who harbors a deadly dark secret.
They’re both witches and command the dark side of the arts. Their magic is no sleight of hand or an illusion, but a product of Lucifer himself. However, there is more to her: she is immortal, a vampire, and her lure impossible to resist.
Beautiful, cold, and deadly: a rare combination for love. Nonetheless, they shared a love so profound they would kill whoever got in their way, to protect that love.
JACKAL, DESIRES OF BLOOD 3
Jackal is the third book in the series, Desires of Blood. Clifford Dunn is a Hell hound, one who asked to be set free of his bonds of Hell. Alone and despondent, he’s dragged into an alley by a beautiful vampire, he’s dinner. But she wants more after seeing what most humans don’t, his blond beauty and incredibly perfect male form. She’ll slake her needs with him, deny his pleas for death and leave him to roam earth alone and forsaken.
But Karma will interfere draw them together in heated passion, the Hell hound and beautiful fallen angel, now an immortal searching for love, will set the pages on fire. Meet them all, her sisters and the man who calls himself their maker, their father Royce, one hell of a vampire.
SHAPESHIFTER: SCORPION,
DESIRES OF BLOOD 4
Magenta is a child of blood. Her giver of life, Royce Bellamy, is a vampire. She's never felt comfortable in the twenty first century. She decides to hone her witchcraft and play with the timeline. Big mistake.
Hugo Mendez is the top matador in eighteenth century Madrid, Spain. He hides a dark foreboding secret. He sees the beautiful Magenta and is drawn to her, sensing there's more to the perfect beauty than most can see.
The beast within him haunts him night and day. Will he be able to capture the beauty’s heart?
Scorpion is book four in the series Desires of Blood: A Legend of Love and Desire.

Book 5 of Desires of Blood will not let you down.
Beautiful, deadly and deceitful Simone has re-entered Royce Bellamy’s life. She’s his maker, the vampire who turned him. With her comes her lover of the moment, Grayson a deadly vampire-shifter. Simone’s got a date with the devil, she’s promised to help him.
Meet Lucian, the devil, who every few thousand years, tries to gain entrance to the world above. This time, he’s hoping to rule what he’s been forbidden. But Simone gets bored far too easily and Grayson’s not taking the bone Lucian’s thrown him.
Enter Cross, a vampire hunter who encounters Simone as she’s fleeing hell. She oozes sex and takes the vampire hunter to her bed. He’ll never be the same. Begin the journey. Read the series, Desire of Blood: Vampire, Warlock, Jackal, and Shapeshifter. 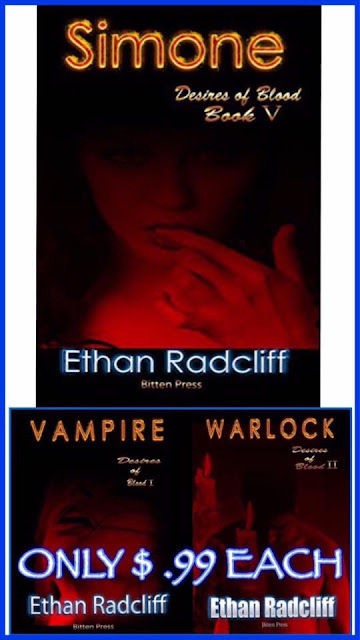 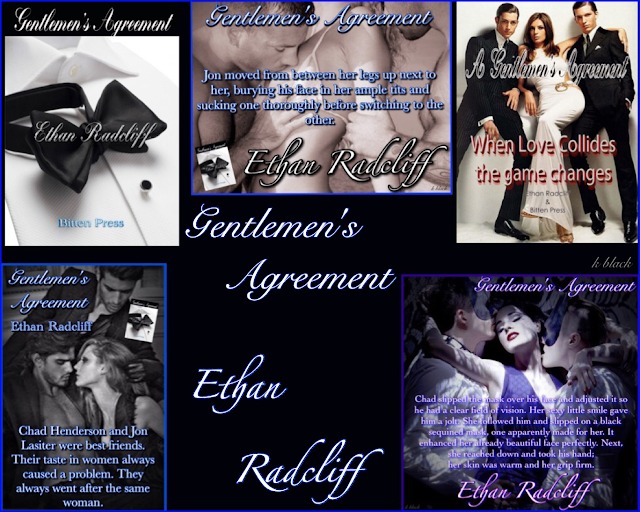 Chad Henderson and Jon Lasiter were best friends. Their taste in women always caused a problem. They always went after the same woman. Cleo Davenport was older and sophisticated with a bevy of men at her fingertips. She was a high-priced Madame. Chad rejected the lifestyle and Jon embraced it. Both wanted the beautiful older woman in their bed. Could they reach an agreement that would suit all their needs? 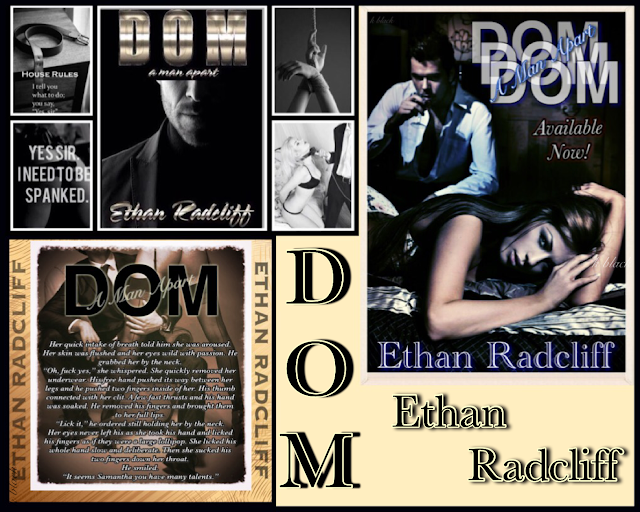 In the world of pain and pleasure, Charles Damien Macavoy reigned. He was a man apart, one who required more than most. He was a Master of BDSM. He’d been asked by another Dom a good friend to train the Dom’s current sub and love interest. Charles had trained many, but found himself attracted to his new trainee. He was aware that the fascination would wear off, it always did, and he’d return the trainee to her Master willing and ready to submit. Lurking in the shadows of a world few are accustomed to is evil. Sometimes a thing of beauty has hidden thorns. Sometimes the hunter becomes the hunted. 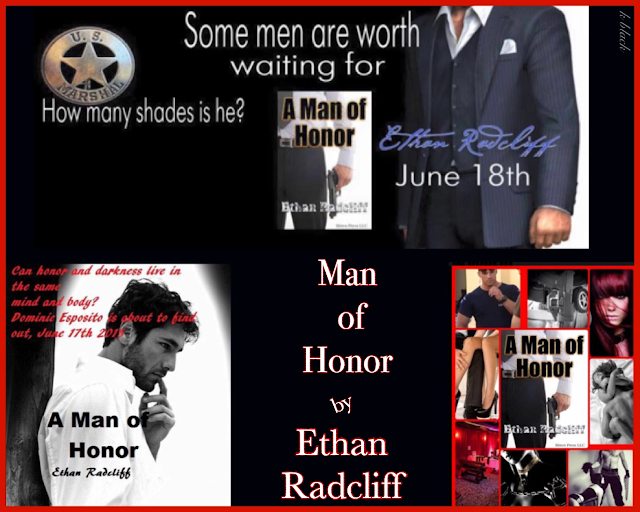 Meet Dominic Esposito, US Marshal, profiler and a hard as nails sort of guy with dark disturbing tastes. He tracks down the deadliest escaped criminals. He's man of honor devoted and to his job, upholding the law at all costs.
Pretty redheaded Shauna Maloney, a high profile fashion model is being stalked. But her stalker is an escaped madman. She’s worth millions and her life is at stake. She’s not one of Esposito’s favorite people, she represents everything he holds unholy, overindulgences, wealth and fame.
They say hate is the closest emotion to love. Will the fiery redhead win over the U.S. Marshal and submit to his darkest desires? Or will her deep sexual cravings surprise even him. 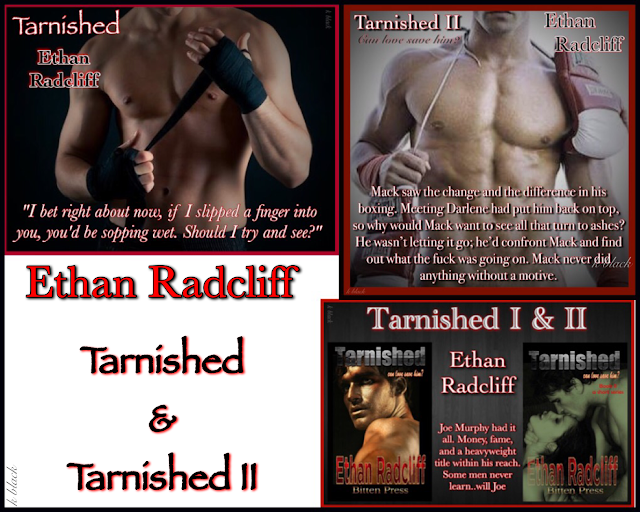 Tarnished I
Joe Murphy had it all. Money, fame, and a heavyweight title within his reach. He played the game but was beginning to lose his footing. One night, he makes a move that will change his life forever, but will the woman he wants want him?
That silver lining is starting to wear thin and tarnish like the rest of Joe's life. Can one woman pave the road to his way back?
Tarnished II
If you enjoyed being introduced to Joe & Darlene in Tarnished . You'll love getting to know them more in Ethan Radcliff's Hot and Sexy sequel Tarnished II.
Some men never learn..will Joe? Joe Murphy has it all. He's a rising star destined to be the next heavy weight champion of the world. He has a woman he loves and her little boy whom he adores. Joe has a habit of sabotaging himself. Will he risk it all one night when he makes a foolish decision? 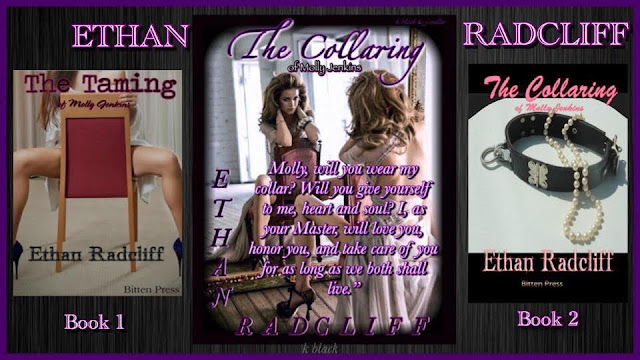 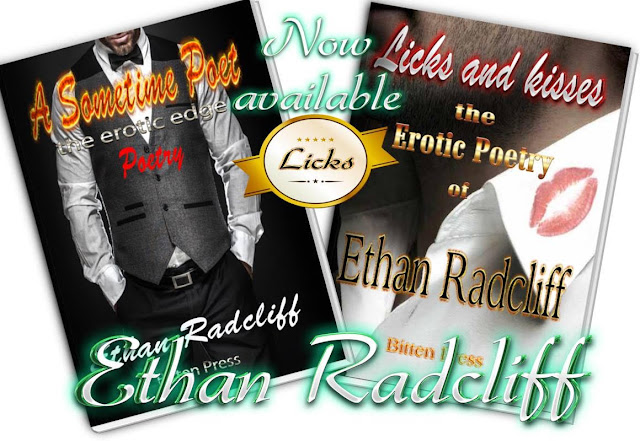 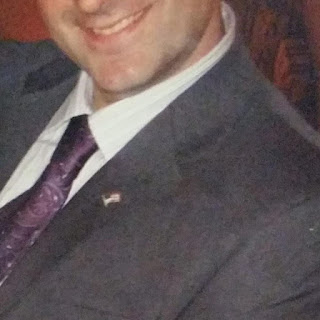 He can see a picture and write a poem. He can see an attractive women and conjure up a sexy scenario. The jiggle of a full ass or heavy breasts can get him going. His mind is always on an attractive face or body.

His thanks go out to Bitten Press LLC and the two lovely women who run it, for goading him on, telling him to go for it and he did.

Follow Ethan Radcliff as he continues to entertain you. He can write any genre and intends to broaden his scope as an author in 2015.

His thanks go out to all his readers. Without them he'd be still be writing notes in his composition notebook, waiting for that right moment. You made it happen for him.


1. When and why did you begin writing?
I was about twelve..and it was a joke. You know, something funny.

2. When did you first consider yourself a writer?
Hmm…that’s hard.  I still have problems with that. I still get nervous thinking what I write just isn’t good enough.

3. Do you plot out your books on paper?
Sometimes…with notes and lines.

Or seat of your pants?
Oh I fly by the seat of my pants. I never know where these characters will take me.

4. Are experiences based on someone you know, or events in your own life?
Both…smiles

5. What books have most influenced your life?
Okay I’m a classics guy. Hate to say it...
Tale of Two Cities
A Christmas Carol
The Tell-Tale Heart…Poe
Maximum Ride…Patterson (this was such a departure for him)
So many authors, poets, Idylls of a King…Alfred Lord Tennyson

6. If you had to choose, which writer would you consider a mentor?
James Patterson - easy read and down to earth.

7. What book are you reading now?
None at the moment.

9. Do you see writing as a career?
Maybe one day.  It’s not easy to break into this business full time and get recognized. I write because I enjoy telling stories.

11. Who is your favorite author and what is it that really strikes you about their work?
James A. Michener…After reading Hawaii, I was sucked in.

12. Do you have any advice for other writers?
Write from your head and your heart. Learn to take criticism…if you can’t then write for the joy of expressing yourself.

13. Which of your books do you like the most?
A Man of Honor…there’s a lot of me in that book.

14. Do you get nervous when you publish a book?
Every time

Favorite time of day?
3 am in the morning

What do you do to relax?
Sit in front of a fire with my GF

Favorite music genre?
Rock and roll and some classical and definitely classic rock.

What questions would you like to ask your readers?
If they wanted me to write a book…a certain story…what would it be? So many know my work now...what do they crave?