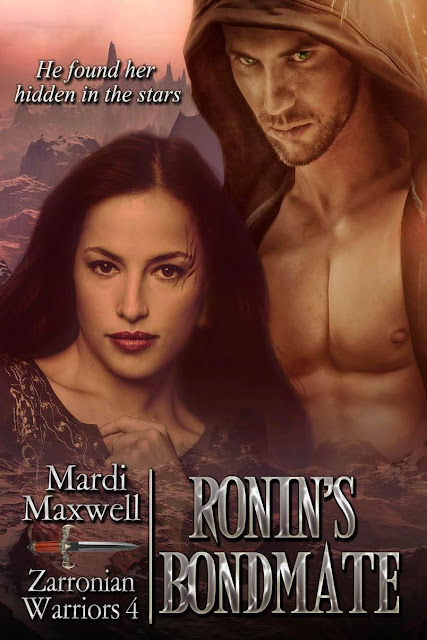 Blurb:
Krystali enchantress Belle of the House of Arlyn stands accused of spying and has been banished from her community. The truth would exonerate her but she doesn’t dare tell it. As an enchantress she can provide for herself except when it comes to defense. For that she needs a worthy warrior.

Zarronian warrior Ronin Hughson recognized Belle as his mate the moment he saw her. Eager to bond, he approached her and was immediately turned away by her spoiled behavior. After consulting with the starship’s doctor, he believes Krystali will produce a kinder mate for him. In the meantime, he feels drawn to protect the spoiled enchantress.

Belle makes sure he knows she doesn’t want him anywhere near her while Ronin makes sure she knows no other warrior was willing to protect her. Resigned to traveling together they try to ignore each other but Ronin’s mating fever and Belle’s troubles set them up for a destiny they can’t avoid.

>Ronin Hughson shoved his way through the crowd of hostile Krystali warriors and their enchantresses. With his pack hooked over his shoulder, and freedom just a meter away, he hesitated then moved another step closer to the exit. The battle beginning behind him was one he had every intention of missing. A rarity for a Zarronian warrior who spent his life fighting and searching for his mate. Behind him, Bellya of the House of Arlyn, stood alone in the center of the room. Angry Krystalis surrounded her, determined to deliver the punishment she’d worked so long and hard to earn. He told himself to keep going. Don’t look back. Don’t look at her. Don’t—damn, too late. His head swiveled as if he had no control over it. She stood alone, surrounded but in no way defenseless. Still Zarronian warriors were taught to protect females and she was quite a sight. Tall and curvaceous with long dark wavy hair and soft brown eyes. Plump lips made for kissing and hips a warrior could hold onto during the most intense moments of passion. Her chin was up and the expression on her face dared the crowd to do their worst. Although he abhorred her arrogance he couldn’t help but admire her bravado. He took another step toward freedom then with a curse he turned back. Honor forced him to stay because whether he liked it or not the blasted female was his mate! The moment he’d seen her he’d known she was the one female in the universe who could save him. The joy, relief and excitement he’d felt had been overwhelming until he’d actually met her. She’d been rude and obnoxious and had treated him like saber cat scat. He’d made allowances for her. Telling himself she was young and inexperienced. That they’d just gotten off to a bad start, and he needed to go slowly with her. Now, after spending more time with her, he knew she was the last female he wanted as a mate He had six moon phases before the Zarronian mating fever blazed out of control and killed him. Bonding with Bellya would save him but he’d rather choose a warriors’ death in battle. Ironically, either choice would have him fighting for his life. Disappointed that he’d finally met his mate and she was so wrong for him, he’d spoken to one of the starship’s doctors. Borg Veeson had advised him to wait a while in case another Krystali female drew him to her. He’d traveled from one encampment to another, meeting hundreds of Krystali females. None had caught his attention, or raised his fever a single degree. Discouraged, he’d returned to Bellya’s village. Now, looking around he wondered if one of the other Zarronian warriors would step forward to protect her. Most of them weren’t even paying attention to the proceedings. The few who were appeared to do so only out of curiosity. Cursing them, he watched as the crowd closed in around her. She, of course, appeared bored and put out with the entire proceedings. An attitude that increased the tension in the room. It also increased the rage of the people around her who were ready for a bit of well-earned revenge. Sighing, he moved to within a few meters of her and prepared himself to save her. His movement drew her attention and for a moment their eyes met. Her eyes hardened as she gave him a disdainful get lostlook then turned her back on him. He growled with anger and clenched his hands to keep from reaching out and pulling her over his knee so he could swat her delectable bottom. 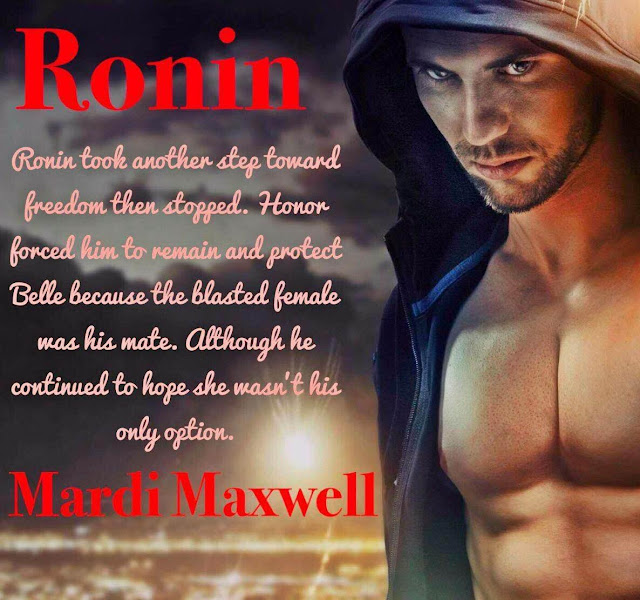 Author Bio:
I love the quirky and the unique. I believe in ghosts, UFOs, and that we have a space station on the dark side of the moon. I’ve always loved to read (anything I could get my hands on) and I especially like zombie and EMP novels. Yes, I know, but I can’t resist them. I also read a lot of romance (historical, contemporary, and I love those shifters and Doms).  I like books that put me "through the wringer," so expect a lot of drama and laughter in my books as well. And, of course, don’t forget the happy ending.

(Remove if not reviewing)

VALAN'S BONDMATE - BOOK 1 IN THE ZARRONIAN WARRIOR series
A Warrior with a Grudge…
At thirty-one Valan Erikson is a fierce and relentless warrior. He's never lost a battle but he's losing the war with the mating fever raging in his body. He's accepted that his death is imminent until he's told a compatible race of females has been found. When he discovers they're Wrothian he refuses to take one as a mate until the Council threatens to strip him of his warrior status.

A Female Who Wants to Escape Her Fate…
Lia ad-San's sire has arranged to trade her to, Gorm ad-Jai, a man she despises. Before she can escape she's abducted by a fierce warrior. Unaware that her sire caused the deaths of the Zarronian females, including Valan's mother and twin sister, she reveals her identity and demands to be freed.

A Complication They Didn't Expect…
Enraged to be bonded to the daughter of his most hated enemy, Valan treats Lia as a prisoner rather than a beloved bondmate. When the Zarronians learn her identity they demand she be punished for her sire's war crimes and Valan realizes too late that he's endangered his mate's life. The fever they share will keep them together but only love can make them want each other if Lia can forgive Valan for his harsh treatment of her.
Valan's Bondmate   Amazon Universal Buy Link

THORN’S BONDMATE (Zarronian Warriors 2) on Kindle Unlimited
While investigating a lead about missing women reporter Daria Zane stumbles across information that could get her killed. Pursued by the aliens who are abducting the women there's only one person she can trust—Ambassador, Valan Eirikson. He’s on Zarronia and the only way she can reach him is by stowing away on a Zarronian starship.

Thorn Valanson has spent several months stationed on Earth and handling warrior business for his father, Valan. He's also managed to avoid the liberated Earth females who have pursued him. Thorn’s past has given him a distrust of females and a hatred of spies, especially female spies. When he catches Daria on his starship he accuses her of spying and locks her in the quarters next to his.
Daria knows that a Zarronian warrior is involved in the abductions on Earth so she can’t tell Thorn the truth. Thorn is angry that she’s on his ship but he has more pressing problems once they meet. Daria has triggered his mating fever and now he lusts after a female he can’t trust.
Thorn's Bondmate   Amazon Universal Buy Link
*

SOREN’S BONDMATE (Zarronian Warriors 3) on Kindle Unlimited
Soren Valanson's mating fever has reached its limits and his death is eminent. As a Zarronian warrior he's determined to die in battle. He searches the Universe for a war and finds one on the planet of Krystali.

Skye is a Krystali enchantress. She can conjure the most deadly substance in the Universe but she can't use it to defend herself. For that she needs a worthy mate.

When Soren practically falls into her lap Skye breaks the law and claims him without his full consent. Trouble follows when an enemy reports her to the Krystali Kouncil. Now it’s up to Soren to save her.
Soren's Bondmate   Amazon Universal Buy Link

- STONE -
A TIME TO LOVE series

STONE – 150 pages of deliciousness for $2.99 or free on Kindle Unlimited
*
In 2230 Earth was invaded by an alien species. After years of war, the men are gone and the women are left to fight for the survival of the human race. When one of the aliens’ time travel devices is discovered a task force is formed to bring some of Earth’s most elite soldiers into the future.

Lieutenant Sunny Blake is ordered to travel back to 2125 and retrieve Lieutenant Jefferson W. Stone. Sunny can lead a squad of fighters and keep them alive, but she’s never had to deal with a man like Stone. A man whose reputation on and off the battlefield has proceeded him into the twenty-third century.

Stone has two interests. High-risk missions and lust-filled nights of pleasure with the many ladies who pursue him. Finding himself thrust into the future, where the women know how to fight but don’t know what to do with a lusty man, is the last place he’d ever want to be.
*
STONE   Universal link: Amazon Universal Buy Link 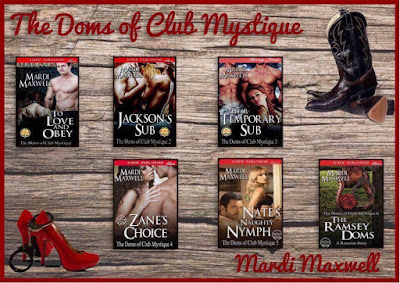